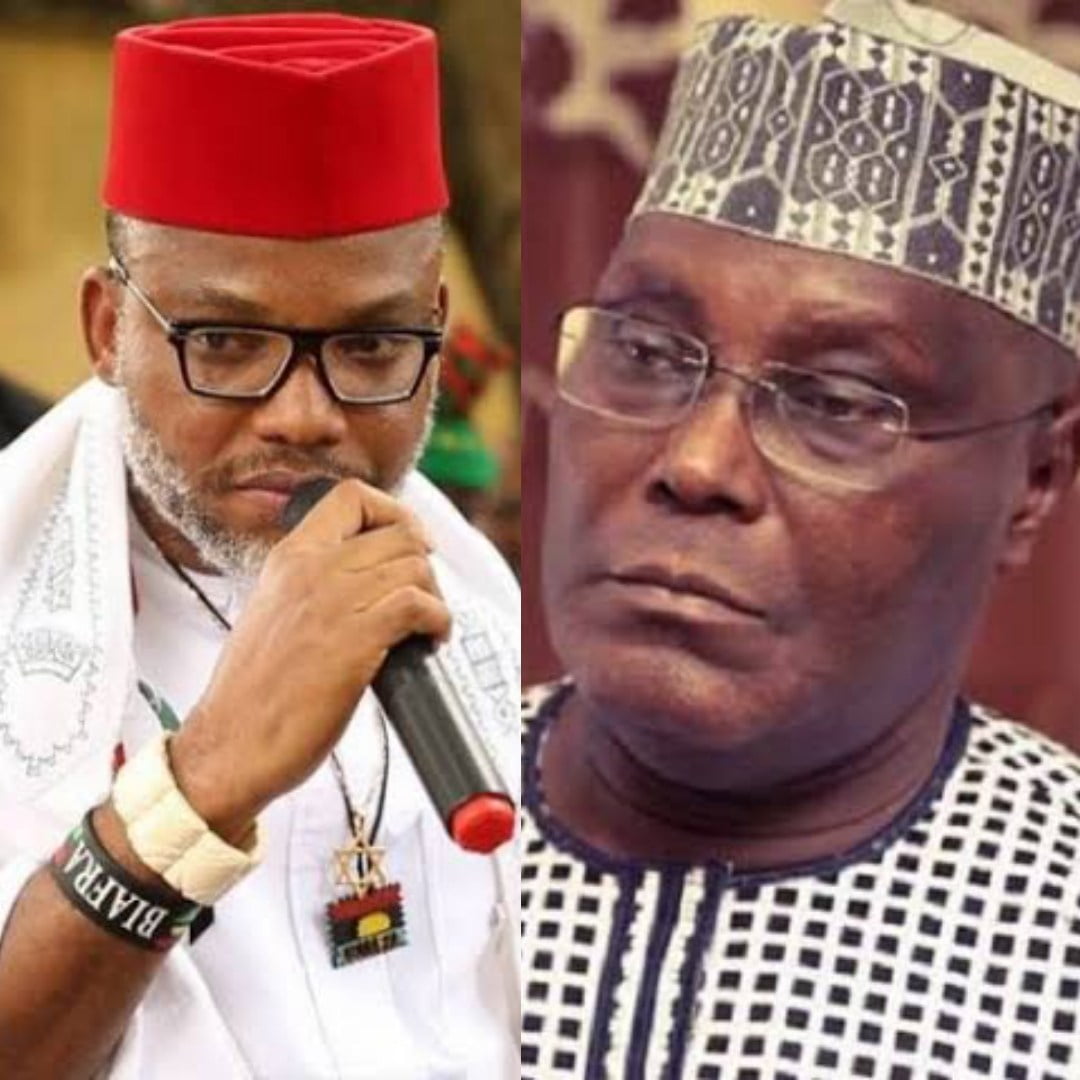 A storm of reactions by Nigerians has greeted the comment made by leader of the outlawed Indigenous People of Biafra (IPOB), Nnamdi Kanu, about Atiku Abubakar, the Presidential candidate of the Peoples Democratic Party (PDP), Nigeria’s main opposition party as well as the election boycott order he gave to “Igbos”.

Naija News had reported earlier that Kanu said Abubakar is from Cameroon and also blamed the PDP Presidential candidate for the failure of Alex Ekwueme during PDP convention in 1999.

“Do you know that Atiku Abubakar is from Cameroon? His area of Adamawa was in Cameroon,” the IPOB leader had said in a live broadcast via Radio Biafra on Saturday.

Kanu also urged “Biafrans” not to participate in the forthcoming election in Nigeria, noting that by voting “Biafrans” will be “perpetuating the misery of our people”.

“By voting, all you are doing is perpetuating the misery of our people.

“To vote in the zoo means to endorse 1999 fraudulent constitution. By voting, all you are doing is perpetuating the misery of our people,” he added.

Moments after the news went viral, Nigerians took to the micro-blogging site, Twitter to air their opinions on the claims by the IPOB leader about Abubakar as well as his election boycott order.

Naija News captured some of the comments below…

Igbos should not come out to vote in the presidential election?

Collect donations from Igbos in the name of IPOB & Biafra. Collect money from opposition politicians to divide Igbo votes.

Mazi Nnamdi Kanu steady securing the bag. The game is the game.

This was the deal Nnamdi Kanu entered with Buhari/APC in order to regain freedom – to promote voter's apathy in SE. https://t.co/AdHhJuCW93

Nnamdi Kanu has fixed the Biafran referendum on the day of the presidential elections, Feb 16 and directed all Igbos to stay at home so Biafran population commission will come and count them for referendum purpose.

Kanu that is on exile in London ??

So, from his base in London, Nnamdi Kanu has recruited thousands of staff for Biafra Census Board abi na Biafra Electoral Commission that will organise the referendum?

Biko who is BiaNEC Chairman? ?

Nnamdi Kanu said Nigeria is a Zoo. You believed him. He said Buhari is a clone, from Sudan, you believed him. Now he’s saying you should boycott the election on Feb 16 — you don’t want to believe him again? ??‍♂️

Nnamdi Kanu of IPOB is urging Igbos to stay at home on February 16th (Nigeria's Presidential election day) to be counted.

Is Nnamdi Kanu not Igbo?

Why can't he come down to Ala Igbo and be counted too?

Nnamdi Kanu is back with a new story. This time, he says Atiku is from Cameroon and not a Nigerian; insists on "No leflendum, no erection". Unfortunately, those who wanted Nigerians to believe him when he said Buhari is Jubril from Sudan, are now asking Nigerians not to mind him! pic.twitter.com/dspVZlECNL

Deji Adeyanju was right about Nnamdi Kanu after all.

The Albino dude is a complete fraud.

Don't be silly, @atiku has offered restructuring which most Igbos have clamoured for over the years. Shouldnt common sense move you all closer to Atiku? You are here following Nnamdi Kanu that RIGHTFULLY valued his late Dog 'Jack' over some of you mega idiots. https://t.co/eGPjnCOhRx

"Atiku is from Cameroon"-Nnamdi Kanu

I may not doubt this because under his govt, OBJ&Atiku gave away Bakassi to Cameroon.

Referee: Nnamdi Kanu from the UK

The fundamental flaw in the Biafra narrative is that Igbos don't recognize any ONE supreme leader.

We igbos need to look inwards and think critically.

Which Kanu? If he is man enough, let him come back to Nigeria. There is no difference between those supporting Buhari and those believing in Nnamdi Kanu's horrible nightmare

Nnamdi Kanu wants people to sit at home on election day in Nigeria, so they won't vote to better their lives. How illogical & delusional. He sits in London with his family enjoying the benefits of good governance, but doesn't want others to vote for the right candidates to get it

Nnamdi Kanu has fixed the Biafran referendum on the day of presidential elections, Feb 16.

He has directed all Igbos to stay at home so Biafran population commission will come and count them for referendum purpose.

Kanu will be counted in London?

Is that why Nnamdi Kanu wants to help same Buhari that killed over 150 IPOB protesters?

Are U all mad? https://t.co/TcBQmRz6fr

Both Nnamdi Kanu and this one over here reside abroad. Just because of APC dollars they've conspired to mislead Ndigbo into Voter's apathy in order give Buhari victory.

Nnamdi Kanu is huge joke. Igbo enwe eze. Nobody decides things for us. We find the truth and follow. It is baffling how people listen to him extremist views.

Everything Deji had said is gradually coming true.

Nnamdi Kanu is a DISTRACTION! https://t.co/G7Ygb6c1Bm

This is enough to tell you who Nnamdi Kanu is now working for. pic.twitter.com/NMoatQeZEV

So his real name is not Atiku Abubakar. It is Sagasse Adjate Aboubakar, originally from Surfi Tariqah a Fulani ethnic group in Cameroon.

Many thanks to our erudite historian Mazi Nnamdi Kanu.

I encourage IPOB members to harken to the call of their supreme spiritual leader, Nnamdi Kanu, and stay away from the election of February 16. According to the Bible “obedience is better than sacrifice”.
Shalom.

Really don't you think we all need Nnamdi Kanu to test our nationality for us.
Maybe some of us might actually be Canadian or American pic.twitter.com/M0VU2DxjeY