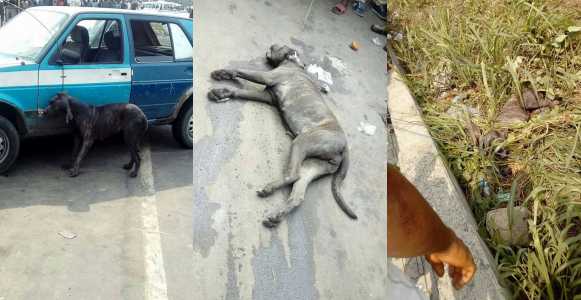 Fears have grieved the hearts of residents in the Garrison area of Port-Harcourt, the Rivers state capital as they claimed to have witnessed what they tagged as an unusual event in their area.

Residents of the Garrison area of the state, during the early hours of Friday, February 1, stormed the streets in their large numbers to descend on a big local dog on the street.

The mob in their mood of anger accosted the dog, tied it up and lynched it to death.

Naija News discovered that the ill-treatment was melted on the dog after it transformed from a man in his mid-fifties. The man was said to have turned into the huge dog after he alighted from his car.

Immediately after he dropped out of his car, the mob watched him closely, rushed his ‘dog version,’ tied him up, and tortured him to death.

The remains of the dog had since been dumped by the roadside, while it killers took to their heels after witnessing the pitiful death of the dog.

This is coming after three gunmen suspected to have killed Mr Nnafor Ogbu, the Ogale Eleme Youth President, have been gunned down by the Rivers Police command.

Naija news had reported that the gang broke into Ogbu’s house in Ogale, Eleme Local Government Area and shot him dead.