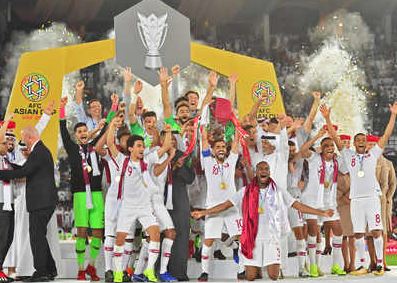 Naija News reports that Almoez Ali scored with a spectacular overhead kick for a record ninth goal of the Asian Cup on the 12th minute to set Qatar on their way to a first continental title after which Abdulaziz Hatem doubled the lead on the 27th minute to end the half 2-0 in favour of the underdogs.

Ali’s record goal came after a protest by the host United Emirates FA into his eligibility to represent Qatar was dismissed by the Asian Football Confederation only a few hours before kickoff.

Takumi Minamino pulled one back for Japan on the 69th minute to give the Japanese the hope of coming back into the game before Akram Afif’s late penalty shattered the hope, thereby helping the Qataris make an emphatic statement ahead of their hosting of the 2022 World Cup.

Japan were chasing a record-extending fifth title coming into the game before the Qataris who drew first blood through the prolific Ali, who was later named Player of the Tournament shattered the dream.

The Guardian UK reports that the victory was celebrated wildly by thousands of Omanis who had turned out to support Qatar in the absence of their own fans, who were unable to travel because of a deep political rift with the United Arab Emirates (UAE).