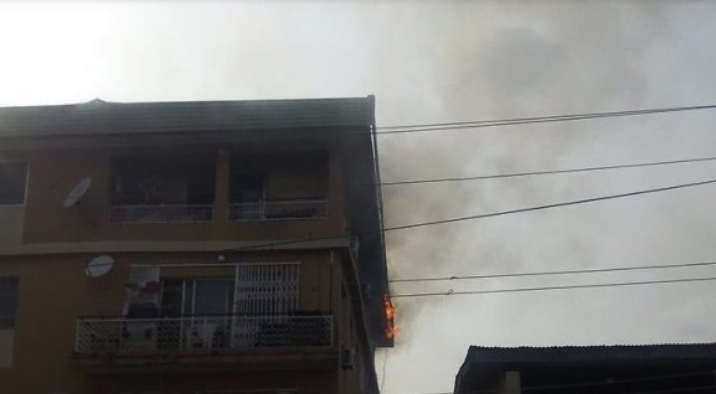 Reports reaching Naija News suggest that the operatives of the Lagos state fire service have on Friday, February 1, stormed an inferno scene in the Olaniyi area of Lagos without water.

Properties worth millions of Naira have been lost after the inferno attacked a three storey building in the Olaniyi area of Bariga, Lagos state.

The inferno was said to have started at about 4 pm, Friday, and burned through the third floor of the three storey building.

An eyewitness of the event, identified by his twitter name as Jaap Stam took to his twitter handle @shurlermozx to share the story. According to him, the inferno started from the third floor and burnt through to the first floor.

Jaap told Naija News that the Lagos state fire service arrived the scene at about 40 minutes later than the exact time the service was contacted.

The fire service haven arrived the scene finally after about 40 minutes of delay, the service stretched out its pipes in an attempt to put out the inferno.

In the process of putting out the fire, the water used to control the wide-spread of the fire got finished while the fire service had to put a call through to request for a back-up plan.

Although no life was reportedly lost, Naija News’ source was not sure of any casualty as efforts to speak with the fire service officials proved abortive.