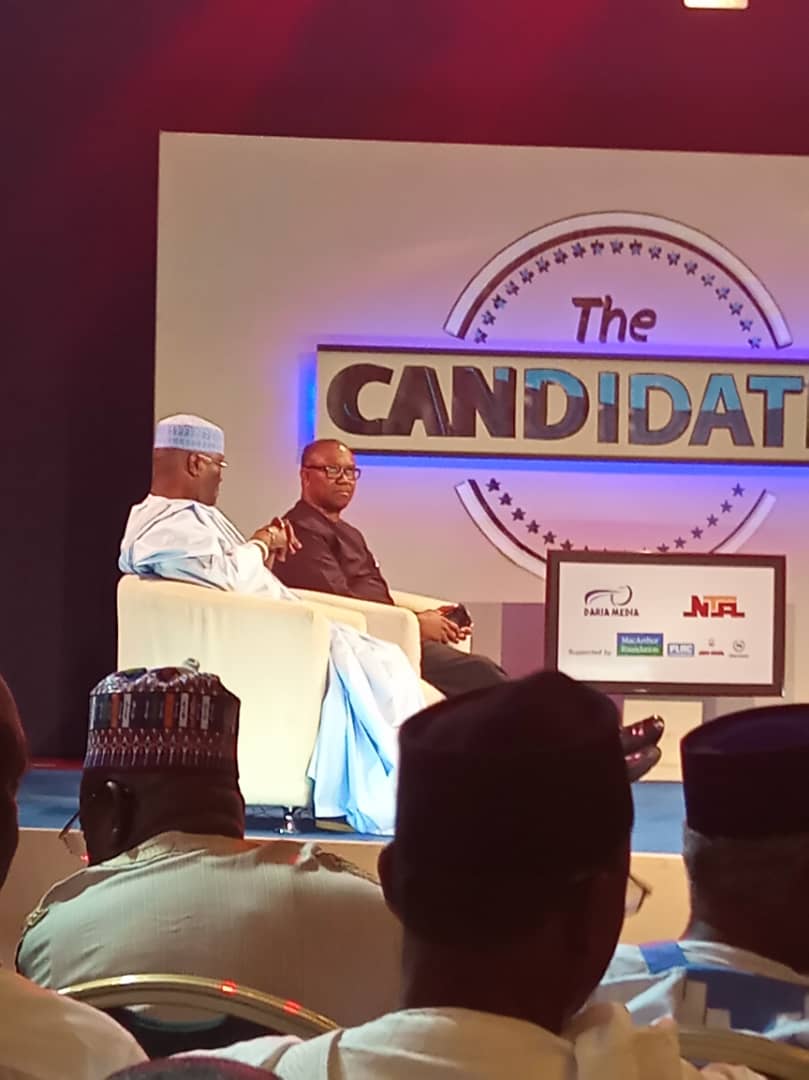 A storm of reactions by Nigerians has greeted the performance of Atiku Abubakar and Peter Obi at The Candidates, a town-hall meeting in Abuja, Nigeria’s capital.

Naija News reports that “The Candidates” is designed by the organisers to have both the Presidential and Vice-Presidential Candidates of selected political parties on stage at the same time and at different dates to take questions from the moderator, Kadaria Ahmed and from the general public through various platforms.

During the programme, Atiku and Obi unveiled the plans of their administration should they be elected into office next month.

Nigerians took to the micro-blogging site, Twitter, to applaud the PDP candidate and his running mate on their performances.

Ladies and Gentlemen, the intelligence of Atiku and Obi combined will make the most brilliant interviewer look quite flummoxed and ordinary.

Kadaria is good on a good day,
With The Osinbajos: she looked better,

But with Atiku and Obi, she’s struggling.#NGTheCandidates

Nah, I don't like the combative posture of the interviewer, but Atiku and Obi are holding up well. How many jobs has Buhari created in Katsina State & how much impact has Buhari had on Katsina? #NgTheCandidates

Despite poor officiating by the Referee,

How can anyone watch Atiku and Obi and want Buhari as Nigeria’s president? #NgTheCandidates

I love the SYNERGY between Atiku and Obi on #NgTheCandidates. When one leaves off, the other picks up.

Unlike one Professor and Baba that I know. The Professor was answering for the Baba — because the Baba didn't understand the questions.

I sympathize with Kadaria. She doesn't want to keep pushing back against Atiku and Obi so she isn't viewed as an APC apologist. But truth is if she had pushed the PMB/Osinbajo team just as hard, that problem could have been solved.

Looking like Atiku and Obi had a sterling performance, one so good that a friend messaged me to say that it is suspect.

Thank you Atiku/Obi for responding calmly and forcefully

So, Kadara knows how to ask tough well 'researched' questions like this? When she was interviewing Buhari the other day she was asking him Primary 4 questions and still helping him answer them. Atiku and Obi are not shaken…awesome.#AtikuOnNGtheCandidates

Look, Atiku is coherent, and Peter Obi has demonstrated competence. It's a no brainier that this is a better team for Nigeria than a senile illiterate tyrant and whatshisface.

What Atiku and Peter Obi have said in 1hr is more than what Buhari and Osinbajo has done in 3 years. Fact!#NGTheCandidates

Only Atiku and Obi could have shaken her this bad. I stan both men.

It’s either they’ve told Kadaria to avoid Peter Obi or Obi has decided to take a backseat by himself.

I choose to believe she thinks Atiku is the weakpoint but the man is making her look really ordinary – talking on and on to make a point.#NgTheCandidates

Kadaira Ahmed is an Inlaw to Mallam Elrufai. Elrufai is married to Kadaira’s immediate younger sister, Asia Ahmed. All those questions she was asking Atiku/Obi at #TheNgCandidate #TheNGCandidate were all rehearsed and arranged with Mallam Elrufai. pic.twitter.com/oPNt5lIFsD

Both @atiku and @obi shows good sense of protocol…they apppear reallly presidential. "@atiku in charge, @obi not interfering when not invited

Absolutely, Kadaria is ruining this event. Thanksfully both Atiku and Obi are spot on tonight! There plan has failed

Beautiful performance by ATIKU ABUBAKAR and PETER OBI this evening on NTA… Best of luck… pic.twitter.com/7ui89WkBXs