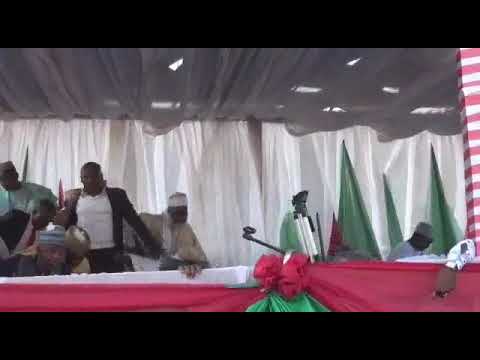 A storm of reactions by Nigerians has greeted the collapse of the Peoples Democratic Party (PDP) campaign podium in Kebbi, northern Nigeria.

Naija News had reported earlier that politicians on the platform of the PDP, Nigeria’s main opposition party, struggled for help on Monday following the collapse of its campaign podium in Kebbi.

This online news platform learned that the unfortunate incident occurred during the PDP rally in Jeda Local Government Area of the State.

Naija News understands that the campaign rally had Isah Muhammad Galaudi, the governorship candidate of PDP in the state, in attendance.

Moments after the video went viral, Nigerians took to the micro-blogging site, Twitter, to air their opinions on the unfortunate incident.

While some sympathized with the politicians, others hilariously stated that the organizers of the campaign rally looted the funds meant to procure a proper podium for the campaign.

Naija News captured some of the reactions below..

That Kebbi PDP stage collapse is not funny to me sha

The stage collapsed while PDP officials were campaigning.

PDP can loot anything available, stage money was looted & use inferior materials

That is reason they can't manage NNPC bt sell it

PDP collapsing on its own campaign stage in Kebbi State. That's how they didn't build strong structures for 16 years in Nigeria while the country crumbled before their very eyes. Boot them out with your PVC. Don't vote for them. https://t.co/P6GQU17bdR

Hmmm…are you thinking what am thinking?

If you think you are in trouble just remember the engineer that designed this stage for the PDP rally in Kebbi state #kebbi #pdp pic.twitter.com/3IJq8XBmnt

The PDP chieftain said [ I seek refuge from Satan the accursed one/ Auzu bilahi Minal Shaytani Rajim/
أعوذُ بِٱللَّهِ مِنَ ٱلشَّيۡطَٰنِ ٱلرَّجِيمِ ]and immediately the stage collapsed.
This shows either God is protecting Nigeria from PDP,or the stage money was looted. pic.twitter.com/h1sRfaS8Sv

They said someone from APC built the stage for PDP ?? pic.twitter.com/HxYBe52dsm

They even looted the money for the stage ????????
There’s nothing PDP cannot loot
Looting is a second nature to them
I hope the men there are safe though pic.twitter.com/1mc4BitwEj

Let me explain what most likely happened here.

Someone was paid "normal" price to erect standard SAFE stage for the event.

But in the usual PDP manner, he slashed the money & did what the balance can afford.

This is corruption better than incompetence in realtime.

PDP stage platform collapsed
corruption was too heavy for the platform to support.
We all must reject both PDP and APC for a better Nigeria.
Vote Sowore of AAC for a cabaless Nigeria and give power to the people! @BBCAfrica @AJEnglish @CNNAfrica @YeleSowore @OfficialPDPNig pic.twitter.com/IbwYkf0BaO

Nigerians React To Atiku And Obi Performance At The Candidates