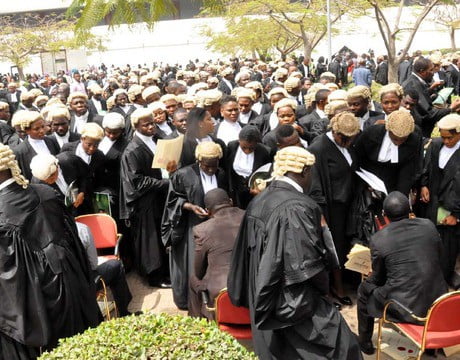 Lawyers In Abuja Resume In Court

There is a strong indication that the suspended Cheif justice of Nigeria, Walter Onnoghen has, as many supporters as critiques even as some lawyers ignored the order by the Nigerian Bar Association for them to boycott the courts.

Naija News learnt that some lawyers have resumed duties as usual in the courts despite the order.

Recall that the association called for the boycott at the end of its emergency National Executive Council meeting yesterday following the suspension of Onnoghen as CJN and the instalment of an acting CJN in the person of Tanko Mohammed on Friday.

The suspension is deemed illegal and has drawn strong condemnations. The NBA ordered court boycott in protest, amid concerns over the violation of the independence of the judiciary.

Our reporter, who monitored levels of compliance among the lawyers in some courts visited, noted that some of the legal practitioners obeyed the NBA order while some others maintained they have an obligation to their clients which supercedes the NBA directive.

Related Topics:NBAWalter Onnoghen
Up Next