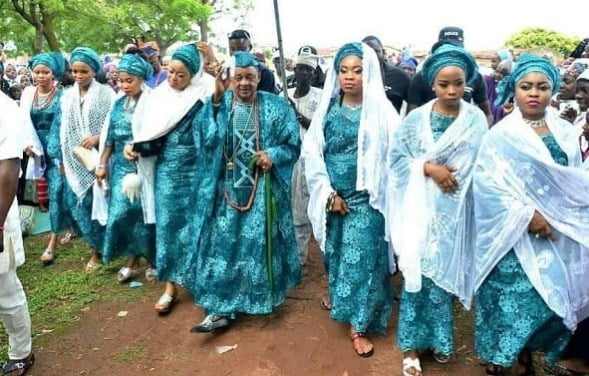 Alaafin of Oyo, Oba Lamidi Olayiwola Adeyemi III, has reacted to the ‘fake news’ that he rejected the People Democratic Party, PDP‘s presidential candidate, Atiku Abubakar when his wife, Titi visited his palace in Oyo town of Oyo State.

Titi Atiku had recently visited his palace, during which she solicited the support of Oba Adeyemi for the candidature of her husband, who was vice president of the country for eight years.

Oba Adeyemi was reported to have said the Yoruba people are happy with President Muhammadu Buhari, who is seeking reelection for a second term in office, on the platform of the All Progressives Congress (APC), because he has done more for the Yoruba than any other administration since 1999.

“PDP is dead. I’ve no problem with your husband, but, Buhari didn’t offend the Yoruba. In fact, he has done more for us than any other government since 1999. And in this place, they call me Baba APC…but, I will pray for you. I wish you journey mercies,” the media reports quoted Alaafin.

But, in a statement, he titled, ‘Tragedy of Fake News’, personally signed by Alaafin, Oba Adeyemi, at the weekend, said: “In recent time, I’ve been hurt by the pain inflicted on me by the circulation of fake news, especially on social media. Some users of social media have been taking advantage of anomie to do a lot of havoc in our social life.

“Ordinarily, I cannot imagine how some people will buy statements supposedly from me, even in total falsehood without my consent and permission. The most recent and, indeed, most injurious of such stories was the visit of Mrs. Titi Abubakar to me recently.

“Anybody familiar with my public life would not believe that the language of the said story, which suggested alienation of Atiku Abubakar could have emanated from me. This is because all aspirants to all public office at all tiers of government are children of Oyo palace, the political capital of the Yoruba.

“Be that as it may, however, the Oyo Palace remains neutral as it leaves the ultimate choice to the people under the democratic tradition.