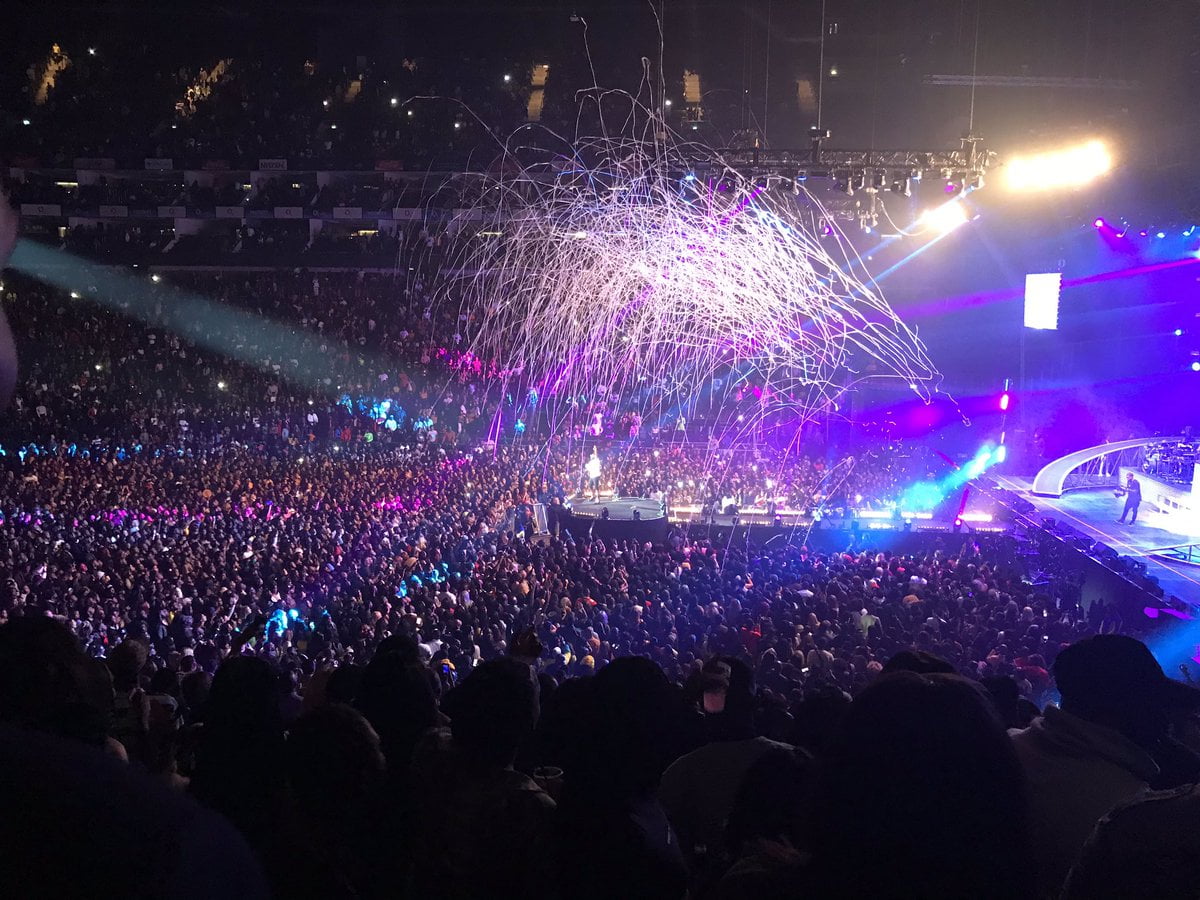 A storm of reactions by Nigerians has greeted Davido’s concert at the 02 Arena in London, United Kingdom.

Davido’s concert at the 02 Arena which is coming after Wizkid sold out the same venue in June 2018, started with sets from various DJs including Tim Westwood, DJ Ecool, DJ Bibi, and DJ So Good.

Naija News recalls that Davido had taken to Instagram to hype the show a fortnight ago, writing: “For me, it’s about always elevating the movement with every step taken! January 27th will be historic! Queen Elizabeth herself go know say we dey town! Don’t hear about it be a part of greatness! #DavidoLiveat02.”

While some Nigerians praised Davido for the concert, others countered him, saying the show was not sold out as claimed by him.

Some shots @iam_Davido at @TheO2

Wizkid fans daily prayer is to see #Davido fall, but Davido keep showing them it did not only happen in the Bible, e go happen for real life too

according to the biggest online music streaming site in the world,SPOTIFY,king @iam_Davido is the first african artiste to solely headline a sold out show in the most popular music arena on earth,the O2 Arena…chee! @wizkidayo cannot reach this level! #davido #wizkid #CRYTOT

Kizz Daniel just fucked himself up himself for be part of history today. #davido

my goodness!! king @iam_Davido is trending in abuja,lagos and london!!! 3 places!! i thought @wizkidayo fans said he is not trending?? God will continue to put y'all to shame!!! #davido #wizkid #davidoliveattheO2

Wizkid did it..Yes…but at @AfroRepublik indoor festival…#davido did it..Yes..he put on sale his own show at the o2 not any fucking indoor festival with line up of major artistes ? #davidoliveat02 pic.twitter.com/THImvdrDvT

Sold out sold out see as sit empty for up..
Shot taken by 9:25pm

Keep deceiving ur self
#davido pic.twitter.com/F43o3HEZVO

Don’t hate on Davido because you are a wizkid fan Be happy for him, the nigga is winning, we Nigerians are winning in this music industry #davido #DavidoLiveAtO2 #DavidoLiveInconcert

#Davido who got the better concert at the O2, Davido or Wizkid?

So you're at #Davido concert and you cannot tweet videos for us that are at home. What's your ticket for?

Mr ???? see empty seats ??? This #davido is just buying his own tickets ownniown. You didn’t sell out O2 ode pic.twitter.com/f4hnldbfmo

Tickets Sold Out Online. If they dont turnup, he still sold out??‍♂️. He made his?. And this video is even just the start of the event, now people are even coming in. Dont spread fake news.
All for RT & Likes. @iam_Davido SOLD OUT O2. Thats what we know! ??? #Davido. https://t.co/BX1s83g1BX

Bad belle b saying no one there yet. Una no dey tire to hate. #DavidoLiveAtO2 #Davido. You asking why he ain’t trending yet. You all forgot quickly that wizkid didn’t trend the other day he was called for the o2 Arena’s show by AfroRepulic. Lol. Ema wa alright o pic.twitter.com/QhxTs347sC

Opportunity for Kizz Daniel to rock the stage and build a landmark for his career like promoting himself on stage, him deh go beef with Davido because of small slap #davido

On a day our own naija brother is shutting down @the02 its arsenal,Chelsea etc that is trending … Nigerians which way na..na wa o #davido

"Ticket not available" doesn't mean it was sold out, once u buy ur ticket that particular sit u paid for will be written sold out at the slot. London stops selling tickets a day to ur show that's why the empty spots where written sold-out . #Davido davido

Yunno as a wizkid fan I’m not bothered I’m happy for David wizkid paved the way for him to see this was possible so we be pace setters and I know wizkid would do something very mad to shut everybody up na smalls lmao let’s enjoy the show ladies and gentlemen ??#davido

Davido sells out the @TheO2 ‼️
? 20,000 people have come out this evening to watch him sing.
It’s Sunday. Tomorrow is work and school day.

6 years ago Davido was playing to a 600 crowd in London.

#davido #wizkid #olamide
Nigerians with our sense of reason Sha… must a show be wizkid live in concert, Davido live in concert or olamide live in concert before we know they headline or own the show…so because someone decided to name his show afroRepublick now means isn't pic.twitter.com/TWuTzmUVlp