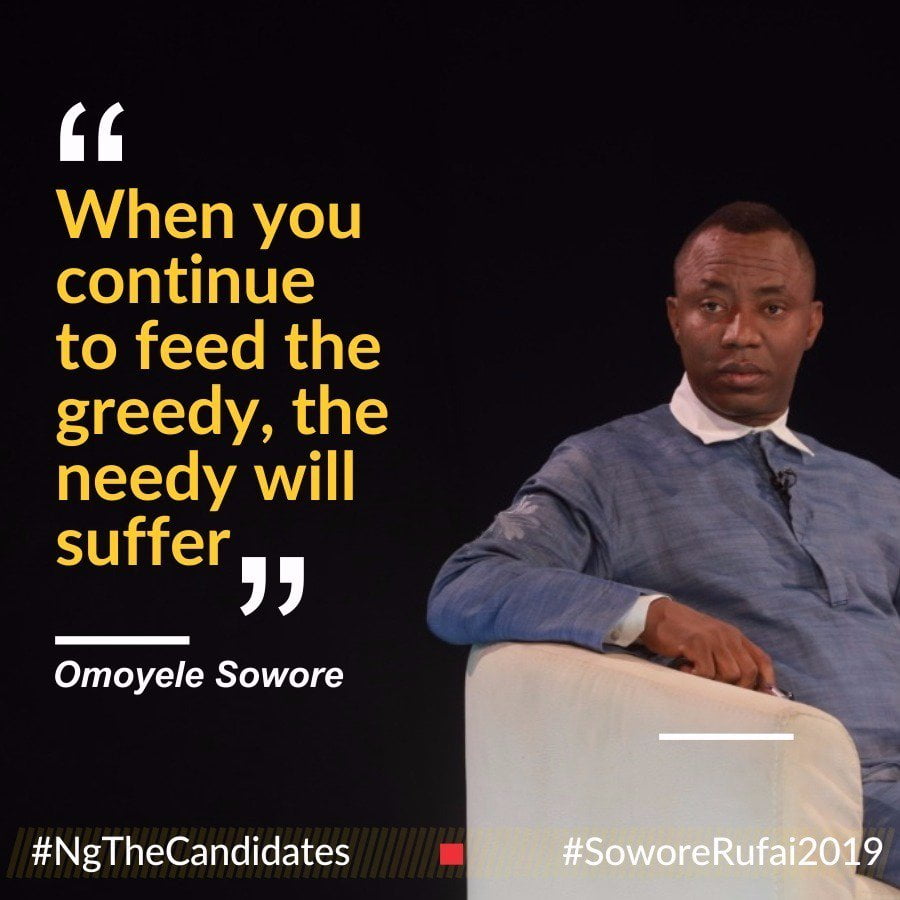 The presidential candidate of the African Action Congress (AAC), Omoyele Sowore, on Wednesday, said if elected into office, he would cut the ‘jumbo’ pay of the National Assembly members.

Sowore says he will slash the pay of lawmakers if he becomes president.
If this is not a dictator in the making, then maybe I don't know the definition of the term.

Naija News understands that Mr. Sowore made the pledge at a town hall meeting tagged: ‘’The Candidates” organized by the MacArthur Foundation in collaboration with NTA and DARIA media in Abuja.

“The issue of some people earning minimum wage and others earning maximum wage where a senator earns N14 million monthly is unacceptable. ‘’Do you know that it will take a Nigerian worker earning N30, 000 monthly about 38 years to earn what a senator is earning per month?” he queried.

Mr Sowore, who described the trend as disheartening, said ‘’our problem in Nigeria is not wealth generation but wealth distribution.’’ ‘’We will not allow illegality in National Assembly,” he said.

He said his government would not only invest in the education of the young people but provide five million jobs for the youth.

And it will take 10 years for a professor to earn a senator's monthly salary…. Sowore

The Sahara Reporters publisher said his government would employ between 300,000 and 400,000 personnel in the security sector so that the country’s security could be strengthened.

‘’By this, the police and the army will be able to keep us secured. Also, we will give study allowances to students.“I believe with our resources, we can support our young people, the elderly, etc,” he said.

He assured that productivity in the country would be ensured ‘’when we invest in our people.”

‘’I am after the knowledge of Nigerians that we can sell to the world, not after cocoa or so. We will build innovative leaders when a university can produce a student that is technologically-inclined.”

On the insecurity in the country, his running mate, Rabiu Rufai, said the AAC would tackle the problem when people are held accountable for their actions. “Nigeria will do better if we don’t condone anybody irrespective of his tribe, religion or region,” he said.