A picture of Emiliano Sala brandished at a rally in his memory, January 22, 2019 in Nantes

The coastguard struggles on Wednesday to find the plane carrying the Argentinian footballer Emiliano Sala, disappeared Monday night over the Channel, not giving up hope to find alive the attacker and the pilot even if their chances of survival are considered “very thin”.

Guernsey police resumed early in the morning. It focuses “on a specific area where we think we have the highest probability of finding something,” tweeted the police. It is based on the study of tides and weather since the disappearance of the plane carrying the striker from Nantes to Cardiff, where he had committed last Saturday.

Three planes and a helicopter are put to contribution. By midday, they had explored 280 square miles without result

Port Captain and Chief Guardsman David Barker at a Press Point in Saint-Pierre-Port on January 23, 2019

The investigators want to focus on the assumption that Sala and the pilot survived and took refuge on the lifeboat that was in the aircraft.

“Given the temperature of the water and the weather, last night was very rough, their chances of survival are very slim,” said the captain of the port and chief of Guernsey coastguard, Nigeria News , David Barker.

But “we are not neglecting anything, we are determined to find these two men alive,” he said.

On Tuesday, the investigators found debris floating in the water, but could not tell if they were coming from the missing plane.

In a voice message sent to relatives via WhatsApp messaging, Emiliano Sala was worried about the state of the plane, revealed Tuesday evening by the Argentine sports daily Olé.

“I’m on the plane, it looks like it’s going to fall apart, and I’m leaving for Cardiff,” said the 28-year-old striker in a calm tone, punctuated by yawning. “If in an hour and a half you have no news of me, I do not know if we will send people to look for me, because we will not find me, know it. ‘am I scared!’, he adds.

Cardiff, who had recruited the player from Nantes for an amount estimated by the press to 17 million euros, said that Sala had organized his own trip.

“We talked to the player and asked if he wanted us to arrange for his flight, which, to be honest, would have been a commercial flight,” WalesOnline Mehmet Dalman, president of the Welsh formation in the prestigious English Premier League. 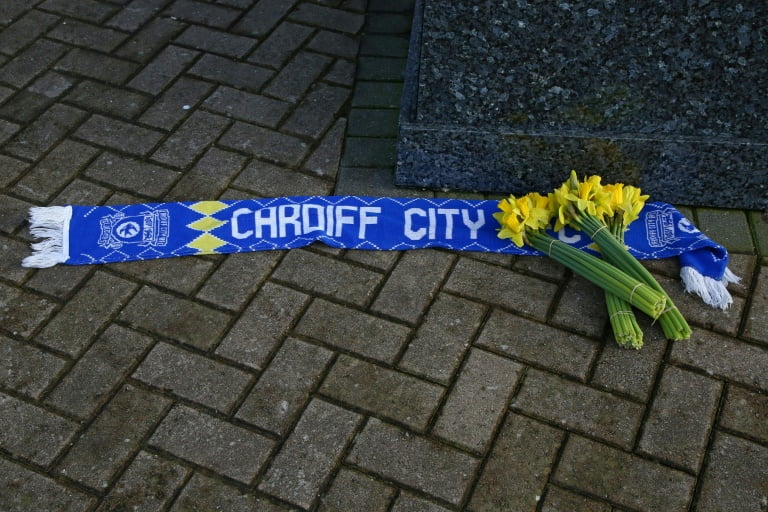 A Cardiff scarf and daffodils laid in front of the club stadium, which Emiliano Sala was to join on January 22, 2019

“He refused and made his own arrangements,” added Dalman.

The single-engine Piper PA-46-310P Malibu, borrowed by the player disappeared from the radar Monday around 20H20 GMT, about twenty miles north of the Anglo-Norman island of Guernsey. The air traffic control of the neighboring island of Jersey had said late Monday that the plane and its two occupants, who initially flew at 5,000 feet, had asked to descend and evolved at 2,300 feet before escaping radar.

The AAIB, the British Air Accident Investigation Bureau, is investigating the disappearance of the aircraft, registered N264DB and registered in the United States.

“The hours go by and I do not know anything, it makes me think of the worst,” said the player’s father, Horacio, in despair in Argentina on Tuesday night.

In Nantes, a club that Sala had just left to sign up with Cardiff, hundreds of people have laid flowers in tribute to their top scorer, scorer of 12 league goals in half a season.

“Wherever you are, we think of you #PrayForSala,” FC Nantes posted on Twitter on Wednesday, where the club’s blazon was replaced by a photo of the striker.

In Cardiff, the emotion was also huge and club director Ken Cho said he was “shocked”.

The 16th round of the Coupe de France against the Entente SSG (3rd division), scheduled for Wednesday, has been postponed to Sunday.

Arrived young in France and trained in Bordeaux, then loaned to different clubs (Orleans, Niort, Caen), Sala ended up signing in Nantes in 2015 for one million euros. He had managed to forget his somewhat awkward look and his rudimentary technique thanks to a precious realism.

After seeing the possibility of a transfer to Turkey in Galatasaray fading away this summer, he finally got a ticket to the winter transfer window, much to the chagrin of coach Vahid Halilhodzic, with whom he had built a relationship strong.

Monday, he had returned to Nantes to take his last business before joining Cardiff. He had published a picture of himself surrounded by his ex-teammates, smiling as always.

Emiliano Sala Had Made His “Own Arrangements” For His Flight (Club)