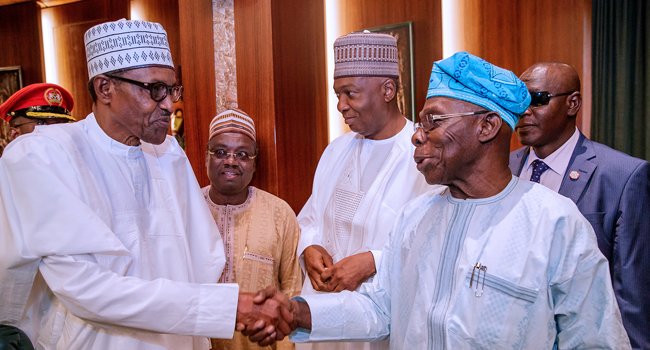 President Muhammadu Buhari, today, presided over the National Council of State meeting, at the Council Chambers of the Aso Rock Presidential Villa in Abuja.

Naija News reports that former President Olusegun Obasanjo, who, only on Sunday, heavily criticised the Buhari administration’s policies and alleged plans to rig the February elections, is also attending the meeting.

It was Obasanjo who said the Christian prayers before the meeting went into closed-doors. A former Chief Justice of Nigeria, Justice Mohammed Uwais, said the Muslim prayers.

NEWS FLASH | After his outburst against President Muhammadu Buhari days back, former President Olusegun Obasanjo appears at the #CouncilOfState Meeting at the Presidential Villa, Abuja. pic.twitter.com/ScyDY5SEJI

The Council of State is an organ of the Federal Government saddled with the responsibility of advising the executive on policymaking.

The council, which comprises president as chairman and vice president as deputy chairman, has as members all former presidents and Heads of State, all former Chief Justices of Nigeria, President of the Senate, Speaker of the House of Representatives, all state governors and Attorney-General of the Federation as members.

Nigeria President @MBuhari is currently presiding over the Meeting pic.twitter.com/E1lvT2IteK

The key issues on the agenda are said to be the National Minimum Wage and the February general elections.

The forthcoming general election and security of the nation are also expected to engage the attention of the Council of State.