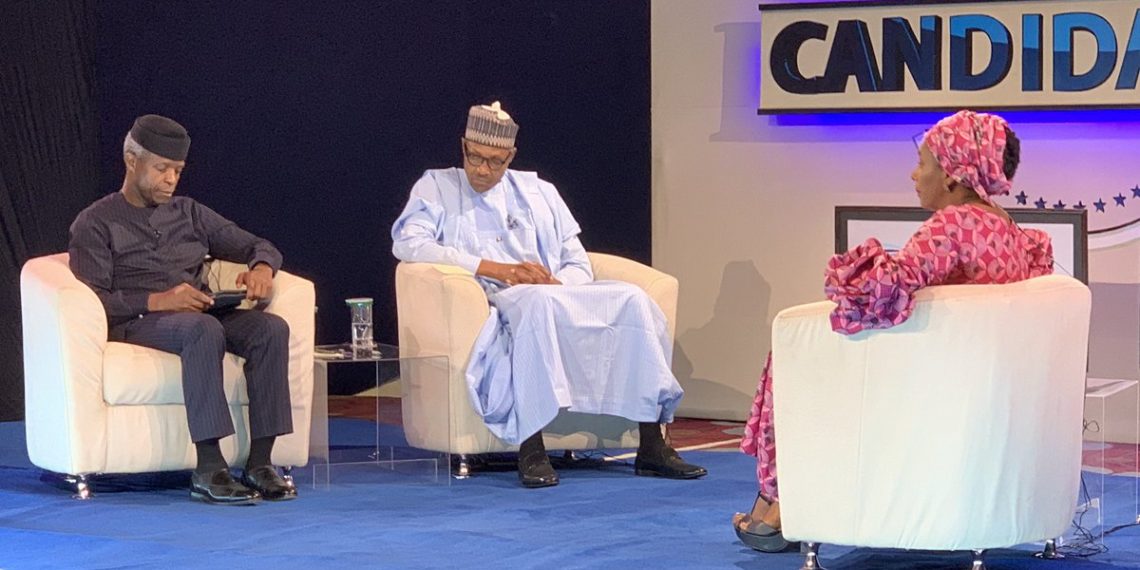 The Peoples Democratic Party (PDP) Presidential Campaign Council in Ekiti State has said that if not for lack of conscience, those still supporting the reelection of President Muhammadu Buhari will go to bed  last night, covering themselves with blanket of shame after seeing the President’s scandalous performance on ‘The Candidates’.

I have watched this reaction from Rotimi Amaechi more than 10 times. ??? #NGTheCandidates pic.twitter.com/2oAyzuxhK4

The State Campaign Council’s Director of Media and Publicity, Lere Olayinka, in a statement on Thursday morning, said “the president talked off-point throughout; answering no question appropriately to the extent that Vice President Yemi Osinbajo became so embarrassed and agitated that he tried to help him answer questions that was asked him.

“It was so terrible that the moderator had to tell the Vice President to allow President Buhari to talk for himself.”

Olayinka, who said it was sad that those promoting the President knew even in 2015 that he lacked both mental and physical capacity to run a local council not to talk of a country of over 200 million people lamented that

“the only reason the cabal running the country  wants him to remain in office is to guarantee their 2023 presidential ambition and access to the national treasury.”

Oga Abeg make you let us hear word. If you say dem do well, may all your children and grandchildren perform like Buhari yesterday for dem school exams….Amen..

He challenged those still supporting the President’s second term bid to in all honesty tell Nigerians why the same Buhari that they saw on NTA last night should continue as president.

“They should tell Nigerians how a man who could not comprehend anything on that live programme except when it had to do with promoting nepotism should keep running the affairs of Nigeria.

“In saner climes, after his disastrous performance on The Candidates last night, President Buhari’s will be asked to go home and rest. But because they are selfish and wicked, they will pretend that the NTA  programme never happened just as they pretended in 2015 when the President was calling APC ‘All Progressives Confidence’, ‘INEC Independent Nigeria Electoral Commission’, Osinbajo ‘Osunbade’ and Imo State ‘Ibo’ State.

“They also saw him in 2015 when he was talking about Deutsche Mark that was last spent in Europe in 1999 as currency being used in Germany, referring to Angela Merkel as President Michelle and Germany as West Germany. But they will never mind the international embarrassment that he has become as long as their hold on power is sustained and their 2023 presidential ambition is guaranteed.”

Honestly, APC should have avoided this TheCandidates debate. Buhari is making a show of shame of himself and the nation.

The anchor, Kadaria asked him a question about restructuring as per… https://t.co/WhTGH6ksE2

While saying that the President has never hidden his support for corrupt elements in his party, Olayinka said;

“To further demonstrate the hypocrisy in his so-called fight against corruption, when asked about the Kano State Governor, Ganduje’s bribery scam, President Buhari responded by saying; “Hopefully, by the time I go to Kano for my campaign, I will have the information,” but at the same time tried to discredit the video exposing the bribery scandal.

He said; “Nigerians, especially the people of Ekiti should take their time to see the video of The Candidates edition of yesterday and challenge anyone coming to preach reelection of the president to them if they will hand the running of their personal business to someone who has proven to be unconscious of happenings around him.”