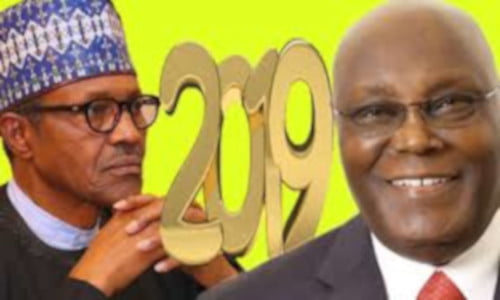 Naija News reports that Prophet Nwazuo who said this in his 2019 prophecies, noted that he saw the Presidential election being declared inconclusive with President Muhammadu Buhari announced as the winner while Atiku Abubakar‘s hands were lifted as the winner of the election.

The clergyman also said the leader of the Indigenous People of Biafra (IPOB), Nnamdi Kanu, will be extradited from his base in Israel and imprisoned.

However, warned that Kanu’s extradition and consequent imprisonment will have devastating and catastrophic consequences not imagined.

Prophet Nwazuo said he saw Governor RochasOkorocha of Imo state “being led out in prison chains with his own people jubilating over him”, adding that a ” PDP man in Imo State” will be “declared winner with people jubilating with him”.

Read the full prophecies below…

PROPHETIC REVELATIONS 2019 & BEYOND UNENDING INTRIGUES
As was given to PROPHET DR EMMANUEL EZENWA NWAZUO
“I will stand upon my watch, and set me upon the tower and will watch to see what he will say unto me, and what I shall answer when I am reproved. And the Lord answered me, and said, Write the vision, and make it plain upon tables, that he may run that readeth it. For the vision is yet for an appointed time, but at the end, it shall speak, and not lie: though it tarry, wait for it; because it will surely come, it will not tarry” Hab.2:1-3.

1. Thus saith the Lord God of Host: 2019 will come and pass in the history of the nation called Nigeria – there shall be turbulent and crisis which shall in no wise swallow Nigeria.

2. Thus saith the Lord, let the watchmen over Nigeria pray for her hour of pains and agonies is here.

3. Let every one that has the mind of peace for this nation raise prayer altars everywhere and cry for mercy because too much innocent blood is crying to the heavens for vengeance.

4. Thus saith the Lord to the people of Nigeria, I brought Muhammadu Buhari like Saul in answer to the prayers of people who rejected the one I sent that have the fear of God. This is just the beginning of pains and cries as his horse whip shall soon be unleashed more without mercy.

5. Thus saith the Lord God, are there truly great men of God over Nigeria, I am angry with the so-called who are only after their pockets and bellies instead of standing strong to declare the truth to Ahab. The so-called Men of God have had their hands soiled with bribes and compensations and can never speak out while the poor are further exploited.

6. As I was worshipping the King of Kings His glory appeared unto me and said write: there is great conspiracy against the church in Nigeria but her leaders are lost in the spirit of Balak and Balaam. Cry for leaders and speak against their evil.

7. I was taken in the spirit and shown the greatest shaking coming from men in army uniform parading the nooks and crannies of every state in Nigeria.

8. I was shown Boko Haram seize states and cities this time openly backed up by notable politicians with international community’s kicking.

9. Thus saith the Lord to the body of Christ: weep or yourselves because your leaders have been bribed to look the other way while slaughterhouses are being prepared for her.

10. I saw a bold headline: NO VACANCY IN ASO ROCK. But people were gathering in groups and saying who then will occupy that vacant seat and there was commotion as to who is the Commander in Chief. We need prayers.
11. I see invasion and invaders everywhere getting set to deliver human heads in trucks.

12. Thus saith the Lord God: the mystery over Nigeria, its Presidency and the man at the saddle shall soon unfold and made manifest with unimaginable vent of anger ensuing.

13. I see total blockade of land, sea and air over the South East because of the activities of Indigenous People of Biafra (IPOB) and their quest for independence. Please my people exercise caution because there will be endless killings.

14. I was shown Governor RochasOkorocha being led out in prison chains with his own people jubilating over him.

15. I was shown PDP man in Imo State being declared winner with people jubilating with him.

16. I was shown the Presidential election being declared inconclusive with President Buhari being announced as the winner while Atiku’s hands are been lifted as the winner of 2019 election. With the powers that be ordering his arrest and detention, this will lead to great tension and unrest.

17. Nigerians should pray against martial music and mass arrests of politicians and notable individuals being suspected to be involved.

18. Let us pray against civil disobedience in the highest order that will grind the nation to a complete halt for 3 days.

19. Let us pray against seizure of popular Pastors and the forceful takeover of their church properties on trump up allegations just to silent every form of oppositions.

20. I see thick darkness invading the centre of Nigeria with blood flowing like water amidst great jubilations by the perpetrators and those in power.

21. Let us pray for Nigeria to overcome this great shaking I see ahead that will lead to sufferings and economic bleedings.

22. I was shown Asiwaju Bola Ahmed Tinubu in tears, shock and feeling of betrayal in the highest order but his foot soldiers shall fight dirty for his sake.

23. I see a tsunami change coming to Lagos which shall be a mystery to all.

24. I see 3 more hefty looking banks being swallowed up amidst economic uncertainties.

25. I was shown the highest order of do or die type of politics in Nigeria with highly technology driven rigging with unimaginable daylight robbery and naked display of power.

26. I was shown Nnamdi Kanu leader of IPOB being extradited and imprisoned but the Lord warns that this will have devastating and catastrophic consequences not imagined.

27. I was shown the Nigerian flag fly at half-mast and all bidding farewell to a former President of the country.

28. I was shown Rev Father Mbaka enter real trouble with the government of the day because of some of his pronouncements.

29. Woe unto you all that are supporting the evil government that is set to wipe out Christianity from the entire Nigeria, it shall not be well with you.

30. Vice President Osinbajo should be more careful now than ever as i was shown a plot to poison him to death through either food, drink or gas agent/AC.

31. Let us pray for him not to be unceremoniously eased out of his position with criminal allegations and betrayal of his person.

32. Let us pray against a satanic plot to use the blood of over 150 people in a flight as sacrifice for 2019 election by wicked politicians. Let us make haste to pray about it now because it is very near. The day of the plane crash shall be on a Wednesday. Take note.

33. Let us pray against this bomb blast I see happening simultaneously around Abuja very close to the seat of power.

34. Let us pray aggressively against a tumult I see programmed in the army. This will carry maximum impact.

35. Woe unto u politicians that syphon and eat up the commonwealth of the people: for it shall not be well with you, your families and generations yet unborn.

36. I see the mother of all battles been drawn in the spiritual realm between the Boko Haram leadership and the Nigerian army with great massacre that has never happened before. As I was shown this great loss of men, officers and war machines shall lead to mass tumult in the army with unintended consequences.

37. Woe unto you city of treachery and abominations, for the hidden secrets of your leaders, shall be exposed in the coming days.

38. I see mass protests everywhere, I see people demanding an end to bloodshed, an end to impunity, an end to nepotism, an end to the imminent collapse of the economy, a end to the evil regime.

39. Let us pray against mass graves I was shown as the Nigerian army tries to stop the rebellion in the South East, but this time the other zones shall rise to demand for their right.