Explosions and gunfire rocked an upscale hotel in Nairobi, Kenya‘s capital on Tuesday in a terrorist attack which has been claimed by Somali militant group al-Shabab.

Washington Post reports that the terrorist attack sent people fleeing into the streets and left body parts on the ground.

The report said smoke from burning cars rose in the air outside the DusitD2 hotel and office park on Riverside Drive in Nairobi’s Westlands neighbourhood. The building was surrounded by heavily armed police and ambulances as wounded people were carried out on stretchers.

Naija News learned that Somali militant group al-Shabab told several Western media organizations that it was behind the attack.

People are seen being evacuated from a hotel, office complex in Nairobi, following the explosion. Photo credit: Twitter

“We are currently conducting an operation in Nairobi,” a spokesman of the terrorist group told Al Jazeera.
Giving an update on the attack, Kenyan national police chief Joseph Boinnet said in a news conference that armed attackers remained inside the complex “in what we suspect could be a terror attack.”

It was gathered that four hospitals in Nairobi were taking victims. One of them, Kenyatta National Hospital, said four people were brought in with gunshot wounds.

An eyewitness, vonne Nkirote, who works at the Red House communications firm, said she had stopped by the Amadiva nail salon when she heard a massive explosion.

People are seen being evacuated from a hotel, office complex in Nairobi, following the explosion. Photo credit: Twitter

“I saw body parts and blood on the ground right outside,” she told The Washington Post as she was escorted out of the complex by police. There she was reunited with several work colleagues, and they burst into tears upon finding each other safe.

Another worker at the complex, Sandeep Sura, said he saw the attackers. “I saw two very young guys with AK47s,” he said, adding that they were wearing all black.

Everywhere outside the hotel were wounded people and pools of blood.

“I am in 14 Riverside drive hiding in a bathroom and we are under attack,” tweeted one man who described himself as being at the scene of the blast. “There was  massive bombs blast then gunshots, please.”

During the attack, heavily armed police moved slowly through the complex evacuating stores as frightened civilians poured out of shops with their hands in the air.

Meanwhile, police at the scene said there might still be hostages in the building, which was cordoned off though there were no official tallies of dead or injured. 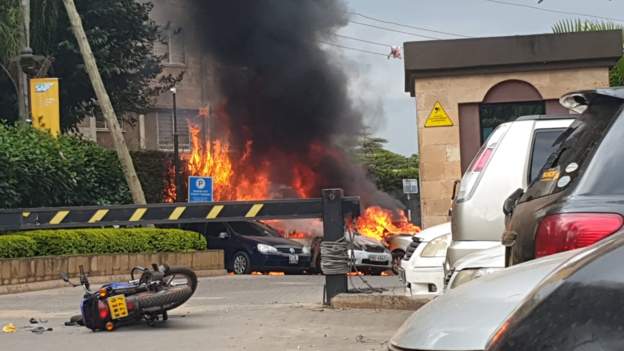 The complex has five buildings, one of which is an upscale hotel popular for conferences and press briefings. The other buildings hold offices, including those of many multinational companies, including Visa and Shell. The complex is also a popular shopping destination.

Watch videos of the explosions below…

RAW: People are being evacuated following an explosion and gunfire in a Nairobi hotel. Somali terrorist group al-Shabaab has claimed responsibility for the attack. pic.twitter.com/CdjrGXxEFn

A spokesman for Somalia-based militant group al-Shabab has claimed responsibility for what he said is "an on-going operation in Nairobi". Some of the latest pictures from #riversideattack: pic.twitter.com/jwRROVmsgj

'We are hearing reports that a suicide bomber detonated himself' – Sky's Africa correspondent, @sparkomat has the latest on a suspected terror attack at a hotel and office complex in Nairobi.

For the latest on this story, head here: https://t.co/JBkgHpANqv pic.twitter.com/33o6i6Q7d9

'Al-Shabab have claimed responsibility for this' – Somlia-based terrorist group has said it is behind an attack on a luxury hotel in Nairobi.