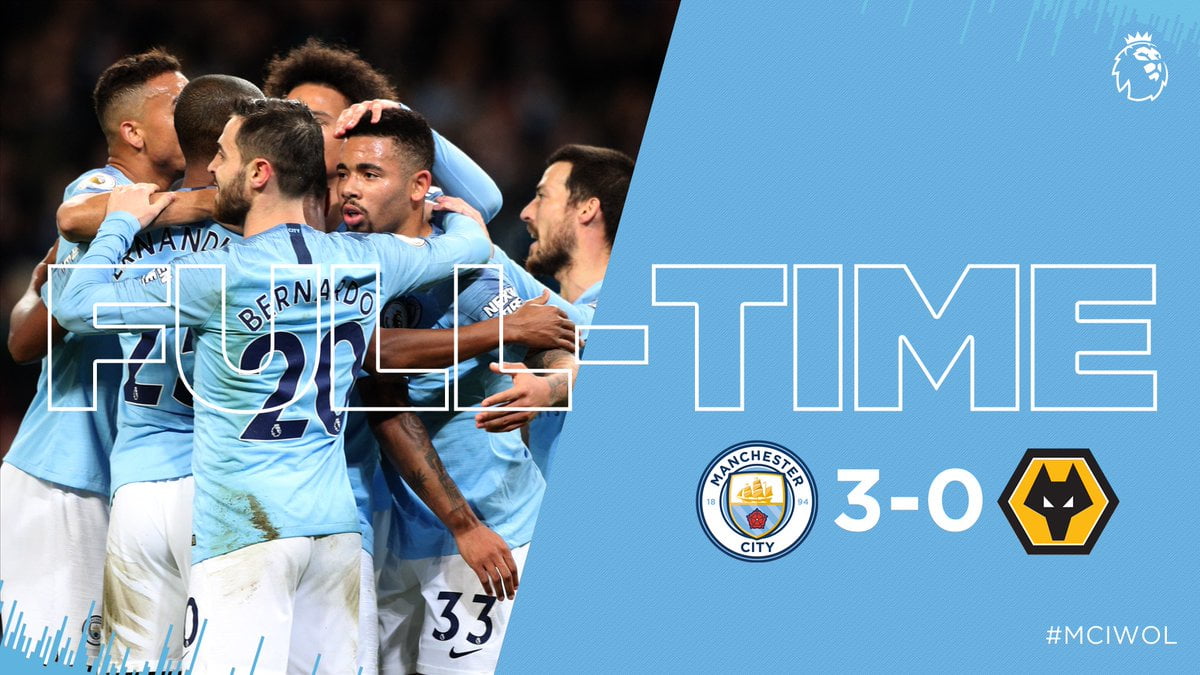 Manchester City moved back to within four points of Premier League leaders Liverpool with a comfortable 3-0 victory over 10-man Wolves on Monday.

Gabriel Jesus poked the home side ahead before Willy Boly was shown a straight red cad for an aggressive tackle on Bernardo Silva.

Gabriel added a second from the spot before Conor Coady flicked a header into his own net to put the game to bed.

PEP ? I will try to be involved with everyone. Everybody plays and has been part. I don't like to play just 11 players in four games,

Everyone has to be ready. Some play more than others but still we are in four competitions and everyone is going to play.

Naija News learnt that the coach, Pep Guardiola  in his his reaction to the  win promised that  his Manchester City team will be poised to pounce if Premier League leaders Liverpool falter .

The City manager was in no mood to analyse the table and insisted he is interested only in his own team’s performances.

“We cannot play the games against Liverpool, we cannot do anything about them,” said Guardiola.”All we can do is win our games and be there. We’ve spoken to our players about it and the fact we cannot control what they can do. All we can do is be there and maybe one day they fail. But if they don’t lose, then they’ll be champions.

“We’ve done incredible numbers after last season, but one team has done better than us so far. All we can do is be there until the end and the results will dictate who will win.”

“I don’t have a magician’s ball to discover when I’m going to lose points,” said Guardiola.

“But I said to the players, ‘don’t look at the calendar for the Liverpool games — forget about it,’ because normally when this happens, in my experience, you lose your games, and after that it’s over.”