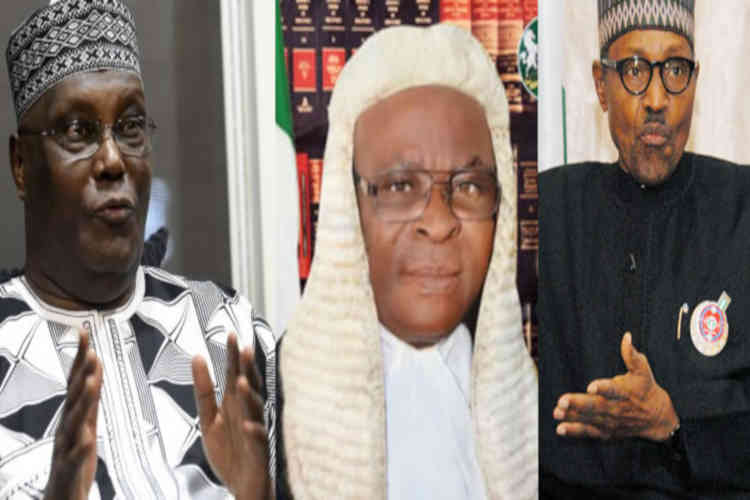 The Presidential candidate of the Peoples Democratic Party (PDP), Atiku Abubakar, says the planned trial of Justice Walter Onnoghen, the Chief Justice of Nigeria (CJN), shows that President Muhammadu Buhari and his party, the All Progressives Congress (APC) are preparing ahead of their “imminent loss” in next month’s presidential election.

This comment was made on Saturday by Phrank Shaibu, the Special Assistant on Public Communications to the PDP candidate, on “Democracy Today“, a live political programme on African Independent Television which was monitored by Naija News.

This online news platform learned that the government will on Monday, January 14, 2019, arraign Justice Onnoghen before the Code of Conduct Tribunal (CCT) in Abuja, Nigeria’s capital on charges of failures to declare his assets as required by law and for operating Bank Domiciliary Foreign Currency Accounts.

The development came after a group identified as Anti-Corruption and Research-Based Data Initiative filed a petition against the CJN for the none declaration of assets.

The group further accused Justice Onnoghen of failing to declare ownership of some illegal accounts outside the shores of Nigeria.

Reacting, Shaibu said: ” The President and his political party cannot rewrite the constitution of the Federal Republic of Nigeria.

“What is happening is simple, the President and his political party are aware of their imminent loss come February and they are preparing, that’s why I said they are negatively being proactive. They are preparing.

“They are preparing to meet us at the election petition tribunal after their dismal performance by the grace of God on the 16th of February.

“So we advise them that this is reckless, it is brazing impunity, but we are not surprised. At least they don’t have anything to campaign with, nothing to tell the people and they know that their rigging plot will fail by the grace of God,” he said.

However, when the host, Ijeoma Osamor, reminded Shaibu that  the issue is with the CCT and has no business with the political party and its candidate, he responded: “Ijeoma it has a lot of business that’s why I took you to the identity of the petitioner. The petitioner has a serious affiliation with the President of the Federal Republic of Nigeria.

“He was the pioneer spokesperson of the CPC, the party owned by the President. Founded by the President of the Federal Republic of Nigeria, President Muhammadu Buhari, he was his personal spokesperson at a point so he is petitioner just like the constitutional lawyer said a petition originated from this same person on the 7th of January and by 14 of January trial will begin at the CCT, it calls for question.

“This is the same country that the Secretary to the Government of the Federation stole from the treasury and till now has not been prosecuted,” Shuaibu added.

But Osamor pointed out that they might not have been petitioned, Shaibu however, played it down, saying: “If there was no petition, they would not have been relieved of their job. They were relieved,” he said.

The anchor recalled that Nigeria’s Senate President, Bukola Saraki passed through this route, Shaibu responded: “Distinguished Senator Bukola Saraki resisted this form of intimidation. We have travelled this road before and they way they want to do now is to ambush the judiciary because they are aware of their imminent lost at the February polls as well as all the gubernatorial elections and all the other elections in this country.

“They are aware of that so what they are doing is intimidate the judiciary, the constitution of the election tribunal will be weakened, more so if they succeed, God forbid to get the CJN to resign, they will now have the opportunity to appoint a pourable person as the acting chief justice of Nigeria to supretent over the election tribunal and that is one thing Nigerians must resist”.