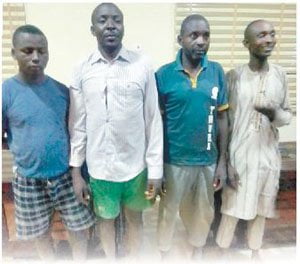 Suspected bandits who have robbed, raped women and killed their victims in cold blood especially in Zamfara State have been paraded by the Police.

The suspected hoodlums, who participated in communal clashes and disguised as cow sellers rustled cattle in many communities in Zamfara State and sold them at an abattoir in Oko Oba area of Agege, Lagos State.

Naija News reports that the prominence of bandits operation in Zamfara State has left more than 40 persons killed and 1,700 displaced Tsafe local government area of the state.

Some of the suspects who were arrested by the operatives of the Inspector General of Police Intelligence Response team ( IRT ) led by its coordinator in South West, Phillip Erieniwa, a Chief Superintendent of Police (CSP), include Mohammad Antino Ego, 50; Bashiru Aliu Nabaru, 37; Lawani Abubakar, 27; Mohammed Kalsari, 30, and Usman Shehu, 30.

According to IRT sources, the leader of the gang, Dankeremi Oreali from Lakadiwa village in Zamfara is in charge of Zurumi forest in Zurumi Local Government Area of Zamfara State, is still on the run.

Armed with sophisticated weapons, including AK 47 rifles and rocket launchers, the suspected bandits operated from the Zurumi forest close to Nigeria’s boundary with Niger Republic, where they ambushed Chadian herdsmen crossing into Zamfara State.

The bandits had killed their victims and sold their cattle to standby buyers.

It was said that the bandits made between N20 million, N5 million and N10 million from their loot depending on the size of the cattle and spent the money on weapons for their dastardly operations, which they usually procured in a border community called Agades in Libya.

Apart from the fleeing leader of the gang, Oreali, there are cell commanders who are in charge of the camps in the forest. They include one Tike, who is Oreali’s deputy; Yellow, who is in charge of a camp in the forest and controls about 300 armed men mainly recruited from Niger Republic and one Alhaji Ibrahim Dan Nigeria a.k.a. Baba Doctor, who was arrested with three of his fighters, while Time, Yellow are also still at large.

Police sources further revealed that the confessions of the suspects allegedly linked them to the kidnapping of twins, cattle rustling, armed robbery, assassination, rape, killing of innocent people in their farms, houses and markets.

Their confessions also showed that one Alhaji Ibrahim is the alleged receiver of the stolen cattle and used trailer to transport them to one Alhaji Ego, who is based in the state-owned abattoir in Agege, Lagos, who in turn sells to butchers in the abattoir.

Confessing Alhaji Ego said,  “ You ask me to tell you my age? I can reach 50 years. I am from Bunza village in Kogi State. I am married to two wives with eight children. I came to Lagos 20 years ago. I was not having cows then and they used to bring like 12 to 13 cows in a vehicle and I used to get N200 per vehicle.

‘’It may interest you to know that after 12 years of hustling, I started collecting cows by myself and through one Alhaji Ali a.k.a. Double six. Alhaji Yaya used to send cows from Guzo town in Zamfara State to me and my boss, Alhaji Ali.

‘’Whenever Alhaji Ali received the cows, he would send them to Agege abattoir and distribute them to butchers in the abattoir who will slaughter them and sell to retailers.’’

Ego revealed that he was arrested after one Sariki Fusell in Zamfara State arrested one Alhaji Ibrahim with stolen cattle and identified him as one of the bandits the IRT operatives were looking for.

According to him, what he received from Alhaji Ibrahim fetched him substantial profit. He said he would buy a cow for N60,000 and sell it for N70,000 depending on the size of the cow, adding that he takes delivery of 10 to 30 cows every week.

Ego, who claimed to have started (the business) recently, said that the total number of cows he received from Alhaji Ibrahim, before he was arrested was 350.

He said, ‘’I also sell only female cows and join in butchering cows which are sold to different people at N100,000 per cow. I send the total money (of cows) sold to Alhaji Ibrahim who in turn sends to their key man in Zamfara, for the reason for which I am not privileged to know. If they use it to buy guns I don’t know.’’

In his confession, Bashiru said, “I am married with two wives and nine children. I am from Guzo in Zanfara. I buy from Alhaji Sowo based in Guzo and I sell directly to butchers in Agege, Lagos State. Alhaji Hoho gave me 50 cows; Alhaji Abdulladi gave me 60 cows; Isa Guzo gave me 80 cows; Alhaji Guzo gave me 70; Alhaji Mohammed gave me 40 cows, while Alhaji Musa gave me 30 cows, which brought the total to 330 cows.

‘’I used to sell the cows at abattoir in Agege, Lagos State, for N100,000 or N150,000 per cow and my gain is N10,000, after settling those I am supposed to settle to have peace. I used to load about 17 cows in a trailer and send them to Ego, with cows belonging to other hustlers.

‘’I know that they (suspects) used to kill or kidnap the owners but there was nothing I could do about it because it would be suicidal to challenge them on their nefarious activities. I did not know that the cows I used to buy from them were stolen, because I used to snap pictures with the cows and the Sariki of the market who they call Delali( head of a market).

He added: ‘’It was one Abdullahi, a native of Zamfara State, who introduced me to this kind of dirty business. Others who also introduced me to the business are; Manfarab and Kaswadaji , all are based in Zamfara. The cows were those crossing from Chad to Zamfara and those cattle that passed through the games reserve in Ndjamena, Cameroon to Nigeria in 2006.’’

Alhaji Lawani said he had one wife and no children yet, but knows that God will give him children soon.

On his own part, ” I take delivery of 15 to 20 cows weekly. Mustafa, Chinkafi supplied me cows from Zamfara market. I know they are stolen cows.

‘’I sell before I give money. See, business is not easy. Sometimes they will cheat you, while at times it will be your turn to cheat those who had been cheating you. I know from the beginning that they used to kill the owners of the cattle to be able to take possession of the rustled cattle.

‘’I have since stopped following the cattle rustlers because my mother threatened to disown me if I failed to distance myself from the bandits and their criminal activities in both Zamfara and Lagos.

‘’Dankarimi used to fight against the Fulani people and when I realised that the suppliers of the cows were bandits, I distanced myself from the gang and vowed that I would not have anything to do with stolen cows again.’’

Both Kasali and Usman pleaded for leniency.