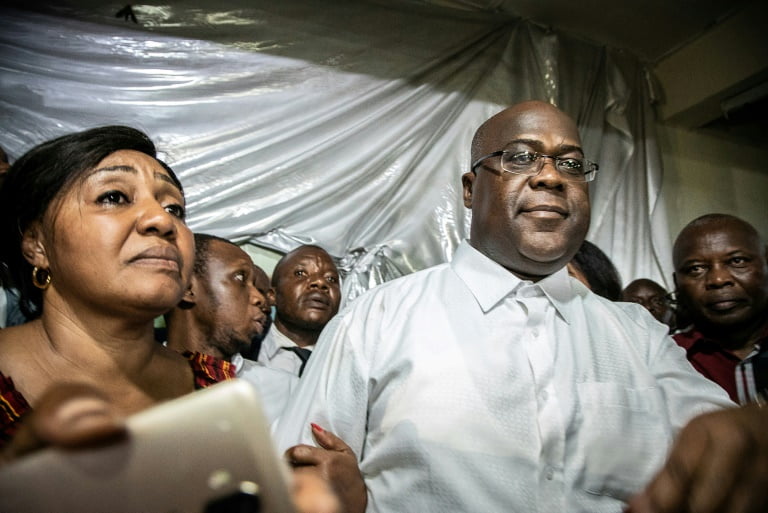 Opposition Felix Tshisekedi after the provisional proclamation of his presidential election on January 10, 2019 in Kinshasa, DRC

This is an unprecedented event in the Democratic Republic of Congo and extremely rare in Central Africa: an opposition candidate, Felix Tshisekedi, was proclaimed Wednesday winner of the presidential election in a round three times postponed since late 2016.

After a very long wait, the Independent National Electoral Commission (CENI) declared Tshisekedi winner with 38.57% of the vote, ahead of the other head of the divided opposition, Martin Fayulu, with 34.8% . He immediately challenged the result and denounced an “electoral coup”.

According to official results, Felix Antoine Tshisekedi Tshilombo, 55, is the “temporarily elected” president who is to succeed outgoing head of state Joseph Kabila, 47 years old.

In his first speech, Tshisekedi paid tribute to incumbent President Joseph Kabila: “Today, we must not see him as an adversary but rather as a partner of democratic alternation in our country”.

“I am happy for you, Congolese people. This process everyone thought was going to lead to clashes and violence, bloodshed, “Tshisekedi said.

“No one could imagine such a scenario during which an opposition candidate would come out victorious,” he added.

The results of the CENI can still be appealed to the Constitutional Court which will proclaim the final results.

The DRC , the largest country in sub-Saharan Africa, is experiencing a double historical situation. This is the first time an opponent has been proclaimed the winner of a presidential election after Kabila’s two elections in 2006 and 2011.

It was also the first time that the outgoing president agreed to withdraw under the pressure of the Constitution and not weapons. Mr. Kabila could not run for a third term.

The dolphin of the outgoing power, the former Minister of the Interior under sanctions of the European Union Emmanuel Ramazani Shadary, arrives only in third position with 23.8%. The other 18 candidates make anecdotal scores.

Fayulu, in an interview with Radio France Internationale, assured that “these results have nothing to do with the truth of the polls”. “It’s a real electoral coup, it’s incomprehensible,” he said.

The Constitutional Court is expected to publish the final results by Jan. 15, according to the current electoral calendar, which took three days late. The swearing in of the new president elected for a five-year term is scheduled for January 18.

Felix Tshisekedi is the son of a major figure in Congolese political history, Etienne Tshisekedi, who died in Brussels on 1 February 2017.

Nearly two years after the death of Tshisekedi father, the body still rests in Brussels, officially for lack of agreement for funeral between his party the UDPS , the family and the power.

Tshisekedi has teamed up for his campaign with former National Assembly Speaker Vital Kamerhe, who is expected to become in case of confirmed Prime Minister victory.

In recent days, Mr. Tshisekedi had also reached out to President Kabila.

UDPS Secretary General Jean-Marc Kabund later suggested “a meeting” between MM. Tshisekedi and Kabila “to prepare the peaceful and civilized transfer of power”, even before the proclamation of the results.

“We are not going to reject the outstretched hand because there is a time for everything. A time to oppose and dispute the electorate but also a time to unite, “reacted the spokesman of the government and the candidate of the power Lambert Mende on the United Nations Okapi radio.

These statements fed rumors of a rapprochement that were not denied and that aroused anger in the camp of the other opponent, Martin Fayulu.

In veiled words, his supporters have warned against an agreement behind their backs. “Kabila does not have to say: I want such person, I do not want such. It is not his private residence, nor a family affair, it is a state affair, ” spokesman for the Lamuka coalition formed around Fayulu, Eve Bazaiba told AFP .

In recent days, the opposition and observers of the Catholic Church had called on the Electoral Commission not to betray “the truth of the polls”.

In 2011, the re-election of President Kabila was tainted with contestation and violence. If confirmed, the new president will have to have a majority in the National Assembly to govern. The legislative and provincial elections were held on the same day as the presidential elections on Sunday, December 30th.

The new opposition president will also have to deal with the security forces acquired from President Kabila and the business community.

Two years late, President Kabila had agreed to withdraw, forced by the constitution to ban a third five-year term. He has been in power since the assassination of his father and predecessor on January 16, 2001.

He will remain in office “until the effective installation of the new elected president”, according to the Constitution.