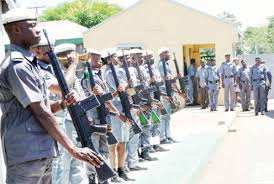 How Customs Man  Was Killed In Encounter With Smugglers

An operative of the Nigeria Customs Service has been killed while another has been injured following an ambush by suspected smugglers at Asero community, Abeokuta, Ogun State.

This was as operatives attached to the NCS Ogun Area Command, on Sunday, were on a routine anti-smuggling patrol in an attempt to secure eight reconstructed vehicles loaded with smuggled rice and kept in Asero community, Naija News learnt.

Daily Trust reports that the suspected smugglers hinted on the move of the NCS men, laid an ambush to resist the retrieval of the vehicles. This led to an encounter between the hoodlums and the customs officers.

In the process, Hamisu Sani, a Customs Assistant I, was killed following “grievous injuries” he sustained. However, Inspector Tijjani Michel who equally sustained injuries from machete cut is said to be recuperating.

The spokesman of the NCS in Ogun, Abdullahi Maiwada, in a statement made available in Abeokuta yesterday, confirmed the incident, saying the victim had been buried in line with Islamic rites.

He noted however that the command would ensure the perpetrators “of this devilish act are brought to face the full wrath of the law.”

He further disclosed that two suspects have been arrested by the police, while the eight vehicles loaded with smuggled rice have been secured in connection with the incident.

Meanwhile, Naija News reports that the NCS apex has late last year assured that it would not rest in carrying out its constitutional duties of preventing smuggling of goods, especially arms, rice and cars through land borders.