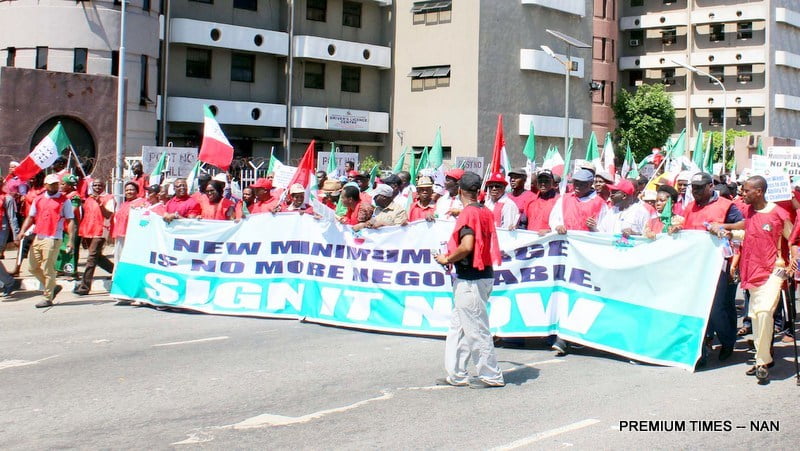 The Nigeria Labour Congress (NLC) have launched a nationwide protest today as their demand for the 30,000 new minimum wage has yet received satisfactory attention.

This is in spite of the attempt by the Federal government to stop the protest four days ago, Naija News reports.

The labour minister, Chris Ngige had led other ministers including the Minister of Finance, Zainab Ahmed, and the Minister of Budget and National Planning, Udoma Udo Udoma, in a meeting with the NLC, TUC and other labour unions in a bid to stop the protest.

Speaking in Abuja, Ayuba Wabba, president of the NLC, said most Nigerian workers are unable to eat three times per day, adding that workers should be able to take care of their family but, in reality, reverse is the case.

The labour leader said workers built the Nigerian economy and “there is no way we can be described as tiny minority”, adding that their welfare and well being must be paramount.

“Workers create the wealth of any nation. If we create the wealth of Nigeria then we must partake in the sharing of such wealth and therefore the welfare of workers must be paramount. That was why we said that this rally will take place at the length and breadth of the country.

“Therefore we have agreed on the negotiation table which took us up to one year negotiating. Workers have been patience and more considerate and we look at all issues and we agreed on the N30,000.”

In Lagos, the protest caused heavy traffic around the state while many commuters were stranded at various bus stops.

The tripartite committee on the minimum wage in November 2018 presented its report to President Muhammadu Buhari and expected it to be forwarded to the national assembly, Naija News reports.

Meanwhile, in another development Naija News learnt that the Chairman NLC in Benue State, Comrade Godwin Anya, was unavoidably absent at the NLC protest march, in Makurdi, today following attack on him by gunmen.