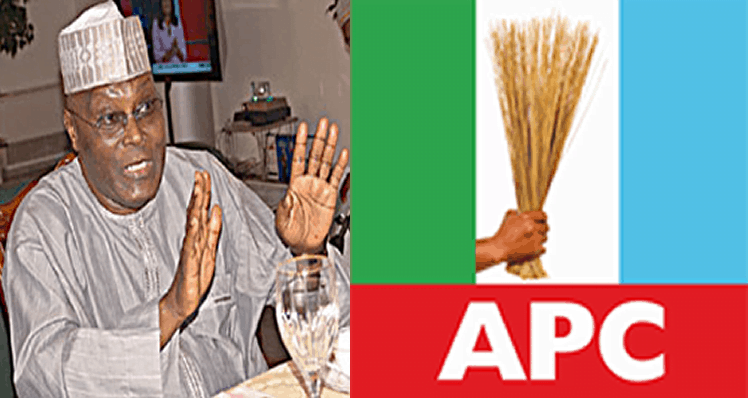 APC Throws Dirt At PDP For Alleging That INEC And Police Plan To Rig 2019 Elections.

Days away from the 2019 elections, the All Progressives Congress (APC) and the opposition Peoples Democratic Party (PDP) have continued at the tail of each other.

APC however said the PDP opted for blackmail and false alarm as its campaign strategy just to drag the President’s name in the mud to make up for its campaign that crash-landed before it reached any threatening altitude.

The APC insisted that Senate President Bukola Saraki, House of Representatives Speaker Yakubu Dogara and all those who joined the PDP from the ruling party were a clog in the wheel of progress in their days in the APC.

But Atiku in a statement by his media adviser, Paul Ibe called on President Buhari to account for the massive job loss and over 90 million Nigerians living in poverty under the regime, Naija News reports.

This is as President Buhari claimed that he had fulfiled all his campaign promises when he spoke recently at Uyo, Akwa Ibom capital at the flag-off of his campaign.

Atiku  who disagreed with President Buhari’s claim warned  Nigerians not return Buhari to office on February 16.

The Battle continued as APC National Publicity Secretary Mallam Lanre Issa-Onilu, at a news conference yesterday said the PDP had practically given up on the chances of winning next month’s presidential election.

He said that accounted for the opposition party’s resolve to blaming institutions of government, such as the police and the Independent National Electoral Commission (INEC), accusing them of working for the APC.

Issa-Onilu said the PDP was trying to create an impression that it was being rigged out ahead of the elections, adding that nobody was planning to rig anybody out because there was no reason to do so.

He said: “When we promised change, we did not mean a change from PDP to APC, but about changing the way we do things, including the application of the justice system.

“The year 2018 was significant in many ways. Importantly, we witnessed in this past year the shameful attempt by the political predators to launch themselves back into reckoning.

“Those who were roundly rejected by Nigerians in 2015 for their grievous crimes of corruption, impunity, and maladministration once again struggled to rise up from the dungeon the people of this country had dumped them.

“They were fierce and reckless in their wicked attempt to return to power to continue their primitive appropriation of our commonwealth for themselves and their immediate family.

“The actions from these elements who have raped our nation for close to two decades were disruptive to the course of progress being vigorously pursued by the President Muhammadu Buhari-led administration.

“The year 2018, particularly, was a tough year for the APC government as we had to confront the monsters who have found their way into the ruling party during the merger in 2014, pretending to have cured themselves of their insatiable greed and callous selfish disposition.

“These enemies of our country found out that the beats have changed and their strenuous efforts to steer the APC administration towards their ignominious ways, as they practised under the People’s Democratic Party (PDP), had become impossible under President Buhari. Predictably, the forces of evil finally gravitated towards themselves and are now ensconced in their wicked nest, called the PDP.

“Unfortunately, they did a lot of damage to our determined efforts in the last three and half years, by constituting themselves into a stumbling-block, using their vantage position in government in conjunction with their associates outside of government who have been deploying their ill-gotten wealth to pervert justice, create a state of insecurity, propagate falsehood and promote dissent. It was a callous strategy design to pull the wool over the eyes of the people of this country.

“As frustrating as their activities were in 2018, they met more than their match in President Muhammadu Buhari. Their Dubai-made strategy has collapsed like a pack of cards.

“The plan was to recreate the 2014/2015 scenario when APC pilloried them for their crimes, which woken the electorate to the reality of the disaster we were headed under the PDP government.

“PDP, led by their discredited presidential candidate, Alhaji Abubakar Atiku paid huge sums of money to some foreign con men in Dubai who posed as strategists.

“They began to spurn daily fake news and make spurious and unsubstantiated allegations against our President, the family members of our President, the vice president, the APC national chairman, notable government officials, and public institutions to deceive Nigerians. Their strategists did not tell them that such would not work when the allegations cannot be proven.

“Unlike in 2015 when the APC allegations were based on facts, which have been validated by revelations upon revelations of heist committed during the inglorious 16 years of PDP rule, the opposition’s disgraceful recourse to false alarm as a campaign strategy this time is a wrong approach. Facts are sacred. Falsehood, no matter how fleet-footed, would be overtaken by the truth in no time.

“The reality has dawned on the fortune seekers in PDP that it is not possible to tag a label of corruption on President Buhari as a demarketing strategy. Neither is it possible to campaign based on issues of governance as the achievements of this administration have shown. It is obvious that the PDP has found itself in a fix.

“Many in the leadership of the main opposition party are finding it difficult to identify with a character like Atiku and many of the charlatans running the PDP campaign are unsellable.

“It is worthy of note that a few of the PDP leaders, with some residual credibility, are battling with their conscience as they are increasingly becoming uncomfortable with the level of immorality that underlines the PDP’s politics.

“Anyone with a modicum of decency cannot be proud of the odious reputation of PDP. When this is added to the fact that the PDP campaign has failed to present any programme to Nigerians, we can see clearly why the party’s campaign has become a stillborn.

“Like a lion, PDP roared, but it didn’t last. It has joyfully ended up as the bleating of a goat. Perhaps, the pun is intended as PDP is actually a goat that spent 16 years eating our yams.

“What has the PDP to offer Nigeria? Or rather, why does the party want to return to power? It is simply to return Nigeria to the past, the past, when our collective wealth was being stolen by a few wicked elites. The past when monies meant for the development of our economy were being pocketed.

“The past when no road, no railway, and no power plant were ever completed, even though huge sums of money were being allocated and released every year. The past when labour was stripped of dignity; when the harder you worked, the poorer you became.

“The past when people with no defined business raked in billions of dollars from our economy, acquiring mansions as if they were buying shoes they never had while growing up.

The past when our country had become the butt of a joke amongst the comity of nations. The past when dubious characters were acquiring fleet of private jets.

“It is heart-warming to see the PDP campaign crash-land before it reached any threatening altitude. It has become apparent that PDP is technically out of the race before the elections start considering the level of disdain and apathy being demonstrated by the voters across the country towards the party.

“As the ruling party on a rescue mission, we call on all well-meaning people of this country to keep the faith with this administration. The graphs are on the positive upward swing.

“President Buhari is laying a solid foundation for a prosperous future. We must endure and be steadfast. We have already turned the corner, leaving behind the years of the locusts under the PDP.

“We are headed towards a future that guarantees stability, economic buoyancy, world class infrastructure, reward for hard work and for honesty, and the security of our nation. PDP remains our collective national vomit. We shall never go back to it.”

Issa-Onilu described, PDP’s allegation about INEC and the police as a defeatist approach, adding that the party was busy creating an alibi so that after the election which they are going to lose, they will have something to hold on to because Nigerians have rejected them.