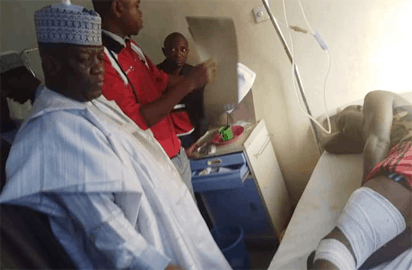 Governor Abdul’aziz Yari of Zamfara State, have paid a visit to some soldiers who were wounded in an ambush by bandits on Saturday.

The soldier, who were currently being treated Federal Medical Center, Gusau, capital of Zamfara, were reportedly recuperating.

The governor was accompanied by Sanusi Rikiji, speaker of the state house of assembly and heads of security agencies in the state.

Ibrahim Dosara, the Media aide to the governor, in a statement, said Ahmad Danjuma, a captain, received the governor and his entourage on Sunday.

“The Zamfara State Governor and Chairman Nigeria Governors’ Forum, Hon. (Dr) Abubakar on Sunday 30th December, 2018 has sympathised with the military officer and seven soldiers that were wounded in a recent battle with bandits in Dumburum Forest of Zurmi Local Government Area,” the statement read.

“The Governor who was in the Federal Medical Centre Gusau where the affected officer and soldiers are receiving medical treatment, visited them with a view to ascertaining their condition.

“Hon. Abdul’aziz Yari during the visit talked with the officer Captain Ahmad Yusuf Danjuma alongside the seven soldiers and expressed satisfaction with the way they are responding to treatment.

“He reassured his administration’s relentless commitment to the sustainability of security agencies’ welfare and the logistical supports to strengthen them in the fight against banditry and other criminal activities in the state.”

Naija News recalls that bandits opened fire on soldiers who were on an operation in the forest.

According to The Cable,the state of insecurity in the state have led to the killing of 3000 people in the last two years.

Meanwhile, the deputy governor of Zamfara State, Malam Ibrahim Wakkala,  has alleged that the governor, his boss, Abdul’Aziz Yari, has sidelined.