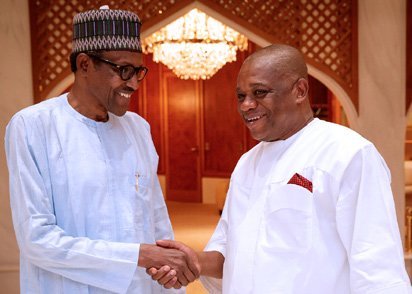 A former governor of Abia State, Chief Orji Uzor Kalu has revealed details of the conversation he had with President Muhammadu Buhari before he joined the rulling All Progressives Congress (APC).

Kalu who governed Abia State, Nigeria from between May 29, 1999, to May 29, 2007 said he left the Peoples Democratic Party for the APC after President Buhari promised to start and complete some projects in the South East.

He tweeted: “I met President @MBuhari, a week before I joined the APC @OfficialAPCNg precisely on the 8th of November, we cataloged the new Niger bridge, Port harcourt/Aba/Umuahia Express Road, Enugu/Awka/Onistha express road, Nitemile to Markudi Road,

“Okigwe/Arondizogu to Nnewi road, Ohafia/Arochukwu & today they are under construction while some are nearing completion @FMPWH .”

“I am glad that the President @MBuhari has resolutely pursued the completion of these and other projects across the nation.”

Mr Kalu is being prosecuted by the Economic and Financial Crimes Commission (EFCC) over an 11-years-long N7.6bn alleged fraud charges.

EFCC is prosecuting Kalu, together with his former Commissioner for Finance, Ude Udeogo, and a company, Slok Nigeria Ltd, said to be owned by him.