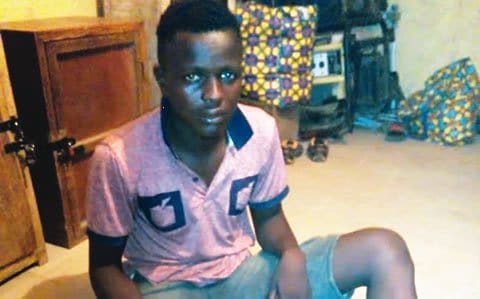 The Ogun State Police Command, has revealed that it’s tracking down three fleeing members of armed robbery gang that terrorised motorists on the Long Bridge on the Lagos-Ibadan Expressway.

The police attached to the Warewa Division had on 25th of December arrest a member of the gang around 10pm while trying to rob motorist of their belongings at gunpoint.

The Police Public Relations Officer in the state, Abimbola Oyeyemi, while speaking on the development stated that the suspect which was identified as Lucky Emmanuel, who claimed to be a resident of Mile 12 area of Lagos State, was among the four suspected armed robbers, who attacked motorists on the bridge on Tuesday.

He further stated that the gang came out from under the bridge to rob some stranded passengers, whose bus had developed a mechanical fault.

He stated, “While the driver was trying to fix the fault, the hoodlums suddenly came out from under the bridge and held the passengers hostage at gunpoint, ordering them to surrender all in their possession.

“Luck, however, ran out on them when policemen led by the Divisional Police Officer, Warewa Division, CSP Akinade Johnson, who were on a routine patrol on the bridge, arrived the scene.

“On sighting the police team, the hoodlums took to their heels and were hotly pursued by the policemen, and one of them, Lucky Emmanuel, was subsequently arrested, while the other three escaped.

Oyeyemi, while speaking with Punch claimed that the command’s operatives were closing in on the fleeing members of the gang, adding that they would soon be apprehended.

“We have launched a manhunt for the fleeing robbers. The interrogation of their arrested colleague is helping us to close in on them,” the PPRO stated.

Oyeyemi said the command had been inundated with complaints about the activities of robbers on the Long Bridge.

He added that the state Commissioner of Police, Ahmed Iliyasu, had directed that the suspect should be transferred to the Federal Special Anti-Robbery Squad for discreet investigation.

According to him, the commissioner also ordered a massive manhunt for the fleeing members of the syndicate so as to arrest them in the shortest time.