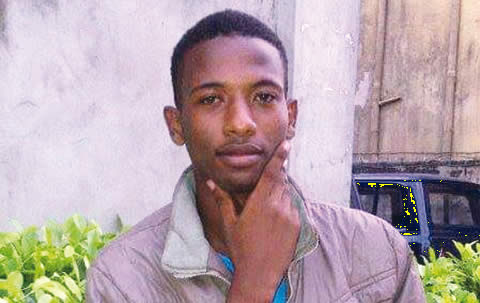 One of the suspects, has narrated how his co-suspect, Jubril Mohammed, was tortured to death by police officers.

Muhammed while speaking on the incident, revealed that the policemen tortured Mohammed till he collapsed and was taken to hospital where he died.

Jubril was among the eight suspects transferred from the Ibafo Police Station to the ZIS.

The 20 year old who hails from Borno State was allegedly beaten to death by detectives investigating the alleged theft few days after he was bought to the ZIS.

The unit commander reportedly broke the news of his death to the family on Monday.

The Zone 2 Police Public Relations Officer, CSP Dolapo Badmos, however, said the victim was sick before he died.

She said, “It’s a case of people suspected to have stolen their company’s goods estimated at N10m. About five of them were arrested. The suspect in question made a voluntary confessional statement to the police and even led operatives to the receiver of the stolen goods, which were recovered.

“While investigation was ongoing, he complained of stomach ache. His father also attested to the fact that he had ulcer. He brought the medication to be used, but the police said they could not administer it.

“They initially thought he was pretending, but he was taken to a hospital where he died. An autopsy will be conducted on the corpse to determine the actual cause of death.”

But Muhammed said the victim died from the injuries he sustained from the torture.

He said, “Seven of us were initially arrested before one other person was added to us. Jubril was tortured to the point that he could not even walk. We were the ones carrying him out after every round of torture.

“On Monday, after the usual beating, the policemen brought us out and took our photographs. They said they were taking us to court that morning. After taking the photographs, Jubril collapsed. They gave me a tin of milk to give him, but he did not respond. He was rushed to a hospital where he was confirmed dead.”

The victim’s cousin, Saheed Isa, said Jubril had been working as a security guard at the company, Barka Nigeria Limited in Magboro, for about one year.

He stated, “The owner of the company, a Lebanese, travelled out of the country. Jubril was called by some co-workers to join them in cleaning the warehouse, preparatory to the arrival of their boss.

“That was going on when he was told that some things had been stolen from the warehouse. He told the co-workers that he did not know anything about it because he did not have access to the keys to the warehouse.Later, their boss invited the police and they were taken to the Ibafo Police Station on Friday, December 14, 2018.”

Isa said although Jubril denied knowledge of the missing goods during interrogation, he identified two co-workers, who had earlier approached him to take part in a shady deal.

The victim reportedly claimed that he was asked by the men to either take N300,000 and quit the job or get killed.

Isa added, “He told us that he was afraid and he told the other workers. He said he decided to agree with the gang to avoid being killed, but confided in some workers that whenever the gang would bring trucks to steal goods from the company, he would raise the alarm on them and shut the gate so that they could be arrested.

“Unknown to him, the gang had carried out the theft without informing him. That was why he was surprised when he was told that the goods had been stolen and he quickly pointed out those he suspected were the culprits.”

The victim’s cousin said Jubril was released on bail after a few days in custody, adding that his father, Ibrahim Mohammed, paid N30,000 to secure his bail.

The Borno State indigent was however re-arrested on Thursday, December 20, 2018, after the case was transferred to the ZIS in Abeokuta.

Jubril’s father, Ibrahim, said when he visited his son a day after he was re-arrested, he could not recognise him again.

Ibrahim noted, “I went to the station on Friday and after waiting till the evening, they brought him to me. I saw a lot of injuries on my son’s body. They had tortured him seriously. He said they told him to confess or else they would kill him. He could barely walk. The owner of the company said the stolen goods were worth about N7m and N8m.

“When I returned to visit him on Monday, their commander called me into his office and asked me if my son had been sick before, and I said no. He said my son was dead.

“I asked the police to release his corpse to me, but they said they wanted to conduct an autopsy. I asked if that would wake him up. I want to bury him. I don’t have anybody to fight for me.”