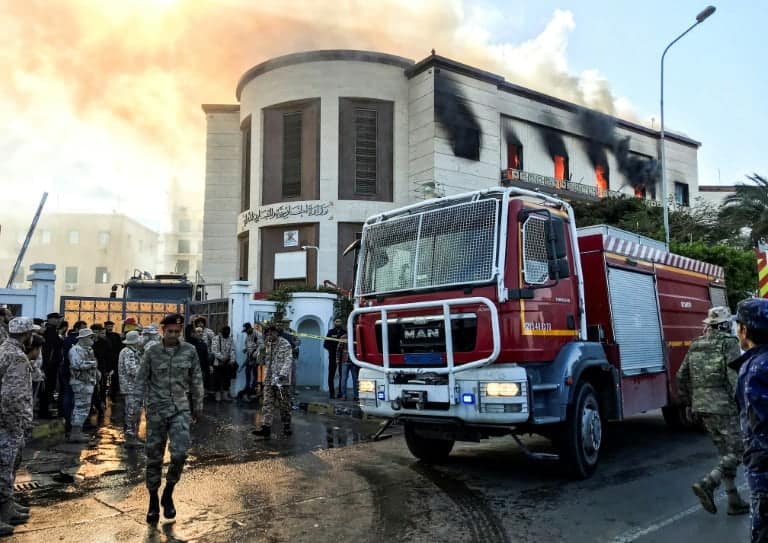 A fire truck and security officials outside the Libyan Ministry of Foreign Affairs in Tripoli, the capital, where an attack took place on 25 December 2018

Three people, including a Libyan diplomat, were killed in a “terrorist” attack, claimed by the Islamic State group (IS), against the Foreign Ministry on Tuesday in Tripoli, illustrating the “security chaos” prevailing in the country.

Three “caliphate soldiers” wearing explosive belts and automatic weapons managed to “storm the headquarters of the Foreign Ministry of the Libyan apostate government in the center of Tripoli,” says the group EI which claims the attack in a statement on social networks, quoted by the American Center specializing in surveillance of the jihadist movement (SITE).

According to a latest assessment of the Libyan Ministry of Health, 21 people were also injured in this attack, which was condemned in particular by the UN mission in Libya (Manul) and the British Embassy.

“Terrorism will not triumph over the decision of Libyans to advance in the construction of their state and renounce violence,” said Manul in a statement.

Interior Minister Fathi Bach Agha admitted, however, that “security chaos” continued to make his country a “fertile ground” for the Islamic State (IS) jihadist group.

He denounced the lack of resources available to his ministry. “Zero weapon, zero vehicles” in the depots, he lamented during a press conference with his counterpart of Foreign Affairs, Tahar Siala.

To this end, Mr. Siala has “renewed” the call of the Government of National Unity (GNA) for a partial lifting of the arms embargo imposed by the UN to his country since 2011.

“Stability can not be restored (…) without a partial lifting of the embargo to ensure security and combat terrorism,” he said.

Tahar Siala also confirmed the death of a diplomat in the attack, director of a department within his ministry, Ibrahim al-Chaibi. The identity of the other two dead is not yet known.

A suicide bomber then entered the building where he blew himself up on the second floor, he added. A second assailant died in the ministry compound after the explosion of a suitcase he was carrying, while the third, who was unarmed and “wearing only a bulletproof vest,” was killed by security forces outside.

A security cordon was set up around the premises of the department ravaged by fire, before the civil protection services can overcome the fire, according to Nigeria News journalists there.

Libya has been in chaos since the fall of the regime of Moamer Kadhafi in 2011. The country is divided between several rival entities, including the presence in Tripoli of a government of national unity (GNA), supported by the international community and in the East, a parallel cabinet backed by the Libyan National Army (NLA), self-proclaimed by Marshal Khalifa Haftar.

This political and security chaos has favored the emergence of jihadist groups, which have committed numerous attacks in recent years.

In September, the EI group – which was once a time to establish a sanctuary in the Sirte region (450 km east of Tripoli) – claimed a suicide attack in the capital against the headquarters of the National Company oil (NOC). Two people had died.

A few months earlier, in early May, two suicide bombers killed 14 people in an attack on the Electoral Commission headquarters in Tripoli.

The Libyan capital was also the scene of violence between rival armed groups from August 27 to September 4, which killed more than 60 people.

“The extremist organization frequently strikes at times when Libyans are absorbed by their internal rivalries,” he said.

Talks have been held in recent months in Paris and Sicily to try to advance the political process in this country of some six million inhabitants, including the holding of elections. 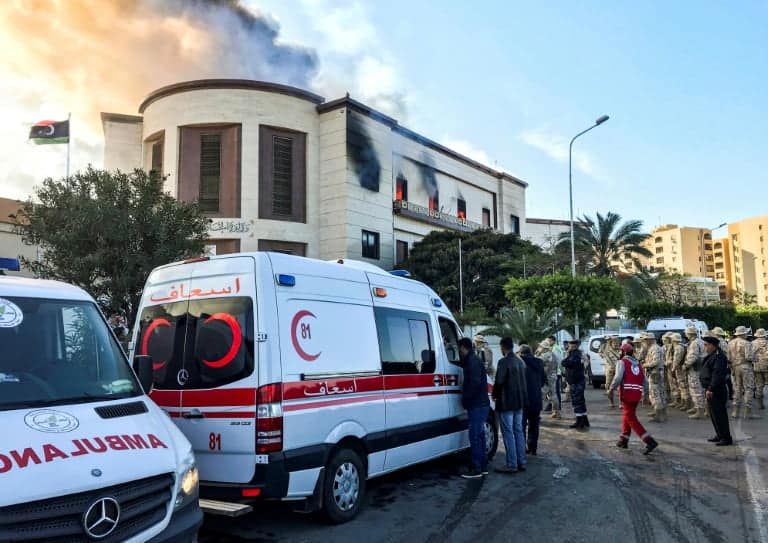 Earlier this month, the president of the High National Electoral Commission (HNEC), Imed al-Sayeh, said a referendum on a new constitution could be held in February, if security conditions are met.

In addition to constituting a potential jihadist hideout, European countries are worried about the situation in Libya around the issue of migrants: tens of thousands of people seek each year to reach the Italian coast from Libya where the Smugglers, taking advantage of the chaos, are very active.