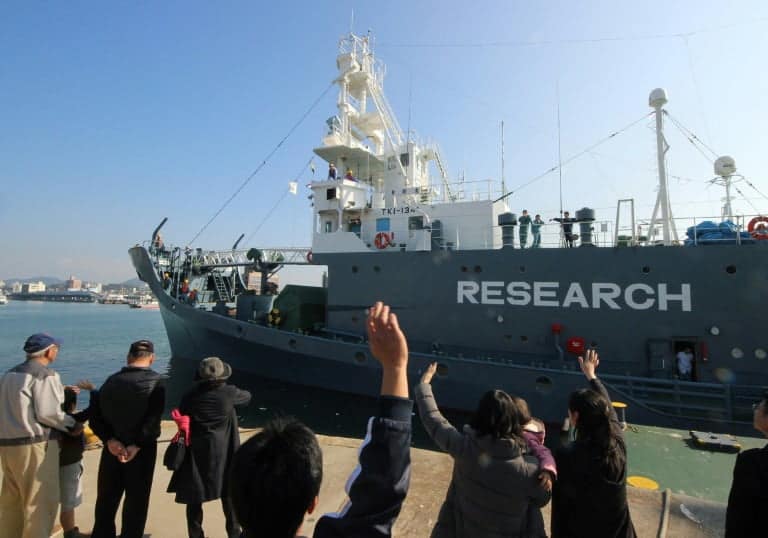 A boat leaves the Japanese port of Shimonoseki for a whaling campaign in the Antarctic, December 1, 2015

Japan announced Wednesday its withdrawal from the International Whaling Commission (IWC) with the aim of resuming commercial fishing next July, openly defying cetacean defenders 30 years after ending it, at least on paper.

In fact, the archipelago has never completely stopped this practice: it uses a breach of the moratorium set up in 1986, which allows hunting cetaceans for scientific research.

But this time, he returns to public fishing with commercial purposes, joining Iceland and Norway.

Critics were quick to see the Australian government saying it was “extremely disappointed” and urging Japan to reconsider its position. New Zealand’s Foreign Minister Winston Peters sent a similar message to Tokyo, denouncing “an outdated and useless practice”.

Japan, however, will refrain from hunting “in Antarctic waters or in the southern hemisphere,” government spokesman Yoshihide Suga said at a press briefing.

The fishery will be “limited to territorial waters and the exclusive economic zone”, “in accordance with catch quotas calculated according to the IWC method so as not to deplete resources,” he assured.

The Commission will be formally notified “by the end of the year”, which will allow the withdrawal to take effect on 30 June.

Mr Suga justified the withdrawal as “the lack of concessions from countries solely concerned with the protection of whales”, “although scientific evidence confirms the abundance of certain species”, he said.

The discord appeared “obvious” at the last meeting of the IWC last September, which led Japan to take this step, he explained.

The case then rejected Japan’s flagship text, “The Way Forward”. 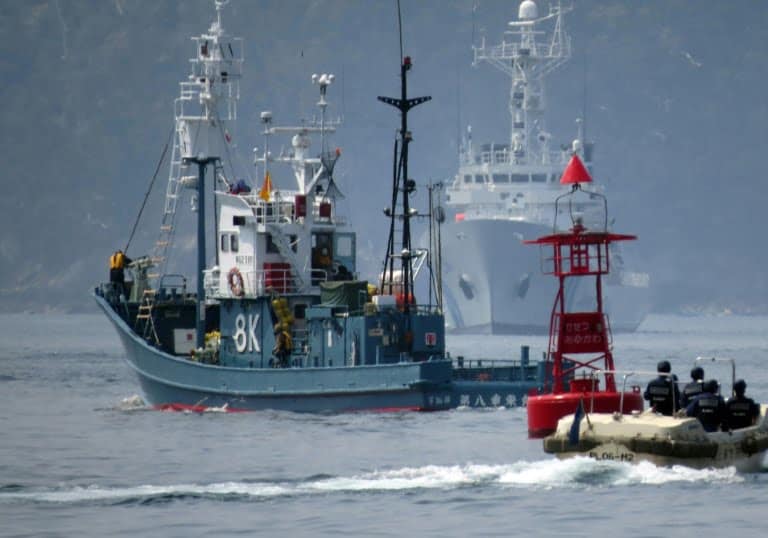 A whaling ship leaves the port of Ayukawa, escorted by Japanese coastguards, for a hunting campaign, April 26, 2014

It aimed to establish a dual track within the IWC, a body of 89 member countries, to co-exist with the preservation and commercial whaling of whales. The latter was managed by a “committee for sustainable whaling”.

The proposal would also have ended the moratorium of 1986, to which Japan is a signatory.

But the whale-watching countries, led by Australia, the European Union and the United States, torpedoed the Japanese text by 41 votes to 27.

Japan’s deputy fisheries minister, Masaaki Taniai, deeply regretted the result of the vote and brandished the ultimate option to leave the IWC.

The Japanese government is opening a new front between detractors and defenders of cetacean fishing, which the Japanese, including the nationalist fringe, consider an important Japanese tradition centuries.

Many members of the Liberal Democratic Party (PLD), a conservative formation of Prime Minister Shinzo Abe, defend “the richness of this culture,” in the words of Mr. Suga. “We hope this decision will pass it on to the next generation,” he said.

“It is clear that the government is trying to put this ad quietly at the end of the year, far from the international media spotlight, but the world is not fooled,” said in a statement Sam Annesley, head of the Japanese branch of Greenpeace.

“Japan’s decision is out of step with the international community, and ignores the need to protect our oceans and these majestic creatures,” he said.

The American Humane Society International (HSI), for its part, lamented that the archipelago “is becoming a whaling pirate nation”.

Japan, she noted, is the biggest financial contributor to the Whaling Commission, which will have to replace the missing funds.

Despite the scientific argument waved for three decades by Japan to hunt whales, the flesh of this animal often ends up on the stalls of fishmongers.