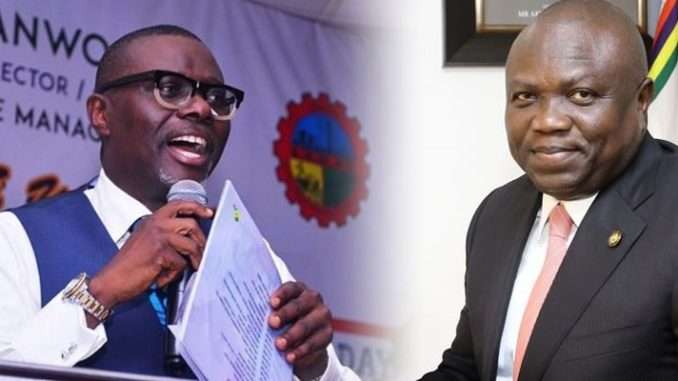 As 2019 elections approach, Hundreds of supporters of Lagos State Governor, Mr Akinwunmi Ambode have rallied to reaffirm the governor’s commitment to the election of the governorship candidate of All Progressives Congress (APC) Mr Babajide Sanwo-Olu.

The rally which held on yesterday, was organised under the auspices of Ambode Mandate Support Group (AMSG) and was attended by thousands of the governor’s supporters.

The crowd of supporters marched from the State Secretariat in Alausa to APC’s secretariat on Acme Road in Ogba where they were received by the State APC Chairman, Alhaji Tunde Balogun, alongside other State executive officers of the party.

Leader of the delegation and Director General of AMSG, Hon Akeem Sulaimon said the solidarity walk was embarked upon to reaffirm the commitment of Ambode to the victory of the APC in 2019 elections at all levels in the State

He debunked any purported alliance with the Peoples Democratic Party (PDP) and Accord Party as reported in some sections of the media.

Sulaimon, who is also the Special Adviser to the Governor on Communities and Communication, said it was also important to emphasize that Ambode had truly accepted the choice of the party, adding that any contrary information is a lie.

“We are here because a lot of people lately seem to be talking for our principal, His Excellency Mr Akinwunmi Ambode claiming to be representing his interest and we need to let the whole world know that if anyone will represent his interests, it can only be those of us that belong to his campaign.

“His Excellency, Mr Akinwunmi Ambode is a man of God; he is a man who believes that the party is supreme; he is a man who has accepted the choice and the position of the party. He has accepted that Babajide Olusola Sanwo-Olu is the candidate of our great party, APC and he has equally been mobilizing not just members of his group but he has been mobilizing the party to ensure victory for Mr Babajide Sanwo-Olu come 2019,” he said.

Speaking specifically on the alleged declaration of support for the opposition party by some supporters of the Governor, Sulaimon said though the rally was planned long before now, nonetheless, there was no truth in the said rumour, adding that the Governor, as a loyal party man, would not do anything to rock the boat.

“We are organizing this to show to Lagosians and Nigerians that our principal bears no grudge; he has no ill feelings. If he had wanted to fight at that time, he could have fought and so if he did not fight then, why would anybody be insinuating that he wants to fight now?

“We are here to let you know that he (Ambode) is not fighting. The Governor’s directive to us is that we should all go out and mobilize for Mr Babajide Sanwo-Olu. Irrespective of how things might have happened, the Governor has equally benefited from the party and he says that he will not destroy the party that he has benefited from,” Sulaimon said.

Responding, Balogun commended the supporters for showing commitment to the party, saying the rally was a demonstration of Ambode’s loyalty to the party.

Among those who led the rally are Commissioner for Local Government and Chieftaincy Affairs, Alhaji Muslim Folami; Special Adviser to the Governor on Civic Engagement, Hon Benjamin Olabinjo; Chairman of Lagos Ferry Service, Hon Paul Kalejaiye; APC chieftain, Chief Denge Anifowoshe and others.