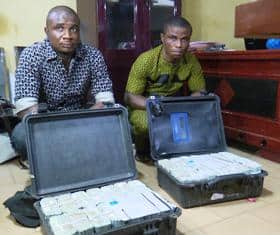 The Economic and Financial Crimes Commission (EFCC) says it has intercepted $2.8 million at the Akanu Ibiam International Airport in Enugu State,Naija News understand.

Acting Head of Media and Publicity of the commission, Mr Tony Orilade, confirmed this in a statement on Friday.

He explained that the money was recovered from two persons suspected to be money launderers by the operatives of the EFCC Enugu Zonal Office on Thursday.

Orilade added that the suspects, Augustine and Ezekwe, said to be working for a company, were arrested based on intelligence report.

Upon their arrest, the suspects were caught with consignments of two suitcases, containing $1.4 million each, totalling $2.8 million.

The EFCC spokesperson said the two men were intercepted at the departure lounge of the airport while they about to board an evening flight to Lagos.

The statement read, “During interrogation, the suspects confessed that they have been in the business of conveying cash for ‘some notable banks’, for over six years.”

According to Orilade, the suspects confessed that they were in the process of doing same for a bank located at New Market, Onitsha in Anambra State, when they were caught.He added that they were already giving useful information to operatives of the commission and would be charged to court soon.

The suspects said they had so far carried out such assignments “four times this year”.

The anti-graft agency recovered the money barely one month after it arrested a Lebanese, Abbas Lakis, for money laundering offence.

Lakis was picked up in November following intelligence report that he had on him undeclared huge sums of monies aboard an airline conveying him from the Kano Airport en route Lebanon.