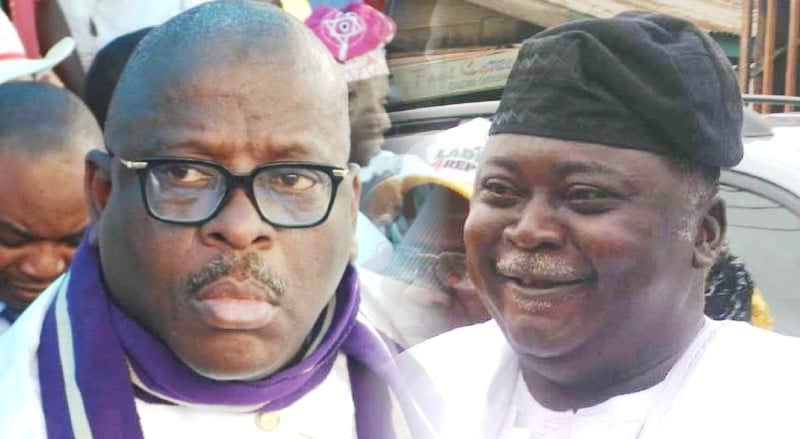 The controversy between the two factions of the Peoples Democratic Party (PDP) in Ogun State has worsened with fresh disagreement from both sides.

1. @OfficialPDPNig Hails Court’s Validation of Buruji’s Expulsion: The Thursday’s validation of Senator Kashamu Buruji’s expulsion from the PDP, by a FHC in Abuja, has vindicated our position that he is not the authentic PDP’s governorship candidate in Ogun state. pic.twitter.com/1V7em8gm0I

Despite the recent judgement of the Court of Appeal in Ibadan, the two factions on Friday insisted that their governorship candidates in the coming elections, Senator Buruji Kashamu and Ladi Adebutu, remain the eligible flagbearer of the party.

Austin Oniyokor, the spokesperson for the Adebayo Dayo-led faction, as well as Sunday Solarin, the Secretary-General of the Ladi Adebutu Democratic Organisation which has the support of the PDP national leadership, appeared on Channels Television’s Sunrise Daily.

Both men traded blames on who was responsible for the leadership tussle and controversy over the party’s representation in the forthcoming polls.

On the procedures of selecting a candidate, Oniyokor argued that there was no part of the PDP Constitution which stated that governorship candidates must obtain nomination forms from the party’s national secretariat.

He stressed that the nomination form known to the law and the Electoral Act was one provided by the Independent National Electoral Commission (INEC).

Oniyokor added that Senator Kashamu obtained his form from the electoral umpire and the party’s secretariat in the state and thus, he was the authentic PDP candidate to contest the governorship election.

He quoted the party’s constitution as saying, “Section 25 of the PDP Constitution says that there shall be a State Party Congress which shall consist of (a) the state chairman which shall be the chairman, and the functions of that Congress include among others; to elect the governorship candidate of the party.”

On his part, Solarin said it was out of place for a group of people to come together in the name of PDP in Ogun and produce a candidate without the consent of the national leadership.

He said, “The primary that they said they organised, they sold forms. Why did they sell forms to party members when they know that purchase of forms was not part of the process?”“I’m yet to even come to terms that Senator Kashamu is a gubernatorial candidate of the party because even the primary that they said they conducted, he did not participate in that primary,” Solarin added.

Oniyokor responded that Kashamu emerged their candidate after the initial winner of the primary held by the faction, Leke Shittu, withdrew from the race.

He explained that Shittu had written to INEC and the party’s leadership at the state and national levels.He then accused the PDP national leadership of failing to acknowledge the receipt of the letter.

Solarin, however, insisted neither him nor the national leadership of the party was aware of such withdrawal of the purported letter.

He said, “Maybe he should produce a copy of that letter … and in any case, his (Shittu’s) candidature was not even known to the national chapter of the party.”That is why I am saying that they are creating a scenario that there is an Ogun State Independent Peoples Democratic Party.”

PDP says they don't want to identify with Buruji Kashamu because he is a wanted fellow in the US…… Same PDP that have Atiku as their presidential candidate. pic.twitter.com/DFeE6MMYzs