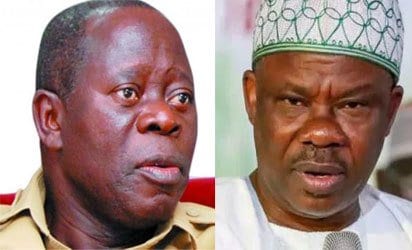 The Ogun State chapter of the All Progressives Congress (APC) has condemned its dissolution by the National Working Committee (NWC) of the party.

Naija News learnt that the state party chairman, Mr Derin Adebiyi, in a statement made available to news men described the action of the national leadership as an exercise in futility.

He said, “The Ogun APC views its purported dissolution as a brazen disregard for the judiciary, hence the Nigerian constitution and flagrant abuse of power by the (Adams) Oshiomhole-led National Working Committee.”

“The action of the NWC is patently illegal; it is an assault on the APC Constitution and outside the bounds of acceptable standards in the conduct of party affairs the world over.”

As earlier reported by Naija News, the national leadership of the APC has suspended its Ogun and Imo state party executives.

According to Adebiyi, the state chapter of the party remains in office and is carrying out its legal duties in line with the constitution of the APC.

He insisted that the action of the national leadership was prejudicial as the case was before a court of competent jurisdiction, presided over by Justice Jude Okeke of the FCT High Court, Abuja.

He explained that in the Suit No CV/363/2018, the Ogun APC sought the protection of the court against attempts by the NWC to undermine it and abridge its tenure in any form.

DAYM commends the proactive dissolution of the Organ of Ogun APC. We have long awaited this decision given the degree of anti-party antics and involvements of the dissolved state exco, matatis mutandis at Local and Wards. pic.twitter.com/HPz2bVTJWw

“It was such acts of impunity that led us in the first place to seek legal protection for a four-year mandate freely given to us by the overwhelming majority of party members in Ogun State in May 2018,” the state chairman alleged.

“There is no iota of truth in the charge of anti-party activities levelled against us, as we remain committed to the ideals of the APC.”

Adebiyi stated further, “You cannot dissolve a legally constituted body, such as Ogun APC exco on a whim. When a matter is in court, all parties are expected to maintain the status quo.

“What Oshiomhole-led NWC has done amounts to self-help and bare-faced attempt to render nugatory the judicial powers granted the courts by the Constitution of the Federal Republic of Nigeria.”

The state chairman said the NWC was legally represented in the present suit and urged it to allow the judicial process to run its full course.He also called on party supporters in the state to remain calm as “the Derin Adebiyi-led APC exco remains in office for the good of our great party.”