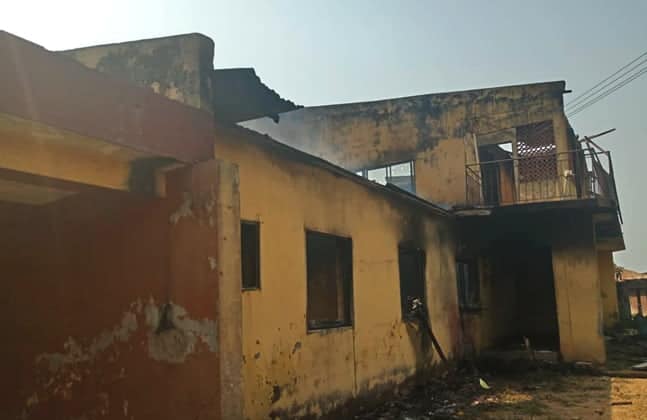 Some youths in Osun State who were protesting against the emergence of a new monarch who had been approved by the state government for Edunabon on Wednesday, decided to burn the palace of Salu of Edunabon, a town in Ife North Local Government.

The new monarch, Kehinde Oladepo, who had stepped out at the early hours of Wednesday, was reportedly kidnapped by the youths, but was rescued by the police.

Further report into the incident revealed that some men Raphel Onifade, Seye Oyelade, one Baba Adashi and Adekola Onifade and six others, were seriously injured.

A source which spoke with Punch stated that about ten people were seriously injured, as some people fought around the palace of Salu.

A policeman who is from Amoloye compound in Isiboni ruling house, Oladepo, emerged the new Salu of Edunabon after the two warrant chiefs assigned by the state government unanimously voted for him, beating six other contestants

However, Nasiru Adebayo, one of the six contestants that Oladepo defeated,came to the town a week after the new monarch began seclusion where he was undergoing traditional rites, brandishing a letter purportedly signed by the Ooni of Ife in his capacity as the consenting authority, declaring him the new Salu of Edunabon.

Report revealed that upon his return to the town, Adebayo, subsequently commenced seclusion and traditional rites.

It was gathered that on their arrival at Edunabon around 1pm, there was no vehicular movement on Sekona/Ile Ife Road, as heavily armed men with Amoured Personnel Carriers, stationed near Salu’s palace battled to disperse the protesters.

Some residents living near Salu’s palace said the monarch approved by the Osun State Government (Oladepo), had left seclusion and was about entering the palace around 8am, when some youths stopped him.

When all entreaties to the youths, who claimed the process that produced Oladepo was invalid, failed, the monarch and others with him reportedly pulled down a part of the fence of the palace and gained entrance.

An eyewitness, who identified himself as Olagunju Ezekiel, said, “because he forcefully entered the palace, those youths that were opposed to his candidature, set the palace on fire and waited for the monarch and his men outside the fence.

When contacted, spokesperson for Osun Police Command, Folasade Odoro, said the number of people arrested could not be confirmed, adding that normalcy had been restored to the area.