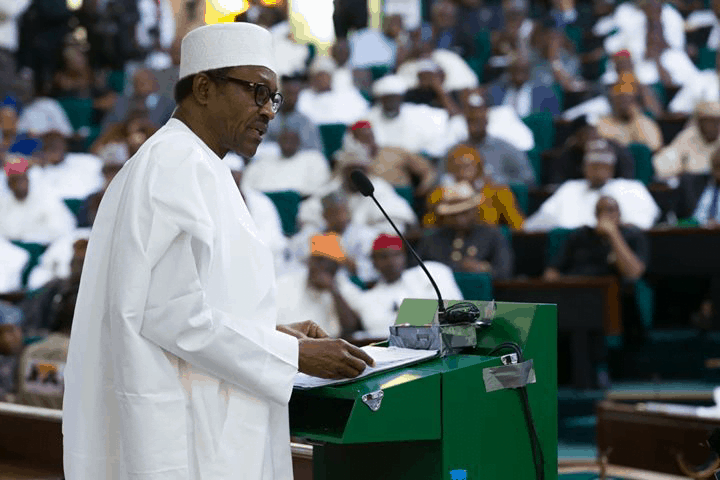 Buhari Tries To Calm Lawmakers Who Attack Him During Presentation 2019 Budget.

In an attempt to calm booing members of the national assembly during his presentation of the 2019 budget, President Muhammadu Buhari said the whole world was watching.

Naija News reports that the president’s presentation was plagued and almost silenced by booing of aggrieved lawmakers and clapping of supporters of the President alike.

With chants of “Lies! Propaganda!”, some lawmakers shouted down the President when he started talking about the strides of his administration. At first, Buhari tried to maintain his composure but the aggrieved lawmakers continued interjecting him.

At that point he said, “May I appeal to the honourable members that the world is watching us… we’re supposed to be above this.”
But rather than reason with the president, the angry lawmakers continued heckling him.

Pointing at him, a lawmakers s”outed ‘grass cutter” in reference to the scandal involving Babachir Lawal, former secretary to the government of the federation (SGF).

Yakubu Dogara, speaker of the house of representatives, had pleaded with lawmakers in the lower legislative chamber not to embarrass Buhari during the budget presentation.

A source had told The Cable learnt that aggrieved lawmakers of the All Progressives Congress (APC) who did not get tickets to contest the 2019 polls planned to protest against the president.

“They have started submitting their placards to Kawu,” the source said.

“They are aggrieved, you know most of them did not get their tickets and that is why they want to protest. That is the reason for the delay, the joint session was supposed to start at 12am.”