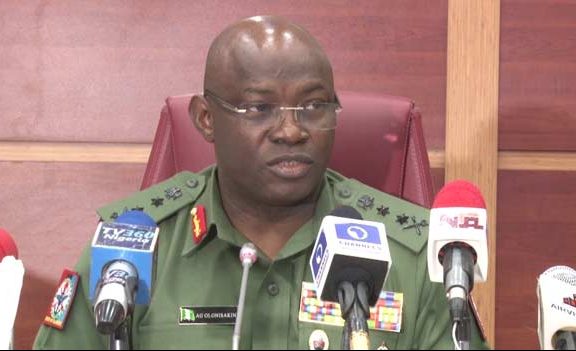 The Chief of Defence Staff, General Gabriel Olonisakin, says the annual budgetary provisions cannot fund the Armed Forces with its statutory responsibilities of safeguarding the nation.

The president is failing his 'former address'. The military guys are no better than pre-2015. So what has the budgetary provisions been used for.
Even the Nigerian army isn't embarrassed at some of the pictures it uploads- of poorly kitted soldiers fighting insurgents.

Naija News Understands that Olonisakin made the statement when he received the Senate Committee on Defence during an operation review session yesterday at the Defence Headquarters in Abuja.

He said, “We have followed due process in implementing these projects some of which were completed in the year 2017. Budgetary provisions alone cannot adequately fund the requirements of the Armed Forces. Thus, alternative funding options need to be given serious consideration.”

The Defence Chief appealed to the National Assembly to formulate legislation that will address the funding challenge in the armed forces particularly at a time when the nation’s security architecture is under review by the presidency.

The arrival of President @MBuhari at the National Assembly amidst cheers of “Sai Baba, Sai Baba” from the lawmakers. Currently, presenting the #Budget2019, the #NextLevelBudget. He opens the presentation with listing some of the major infrastructure projects across the country. pic.twitter.com/7E8niYJjR8

In response, the Chairman of the Senate Committee on Defence, Senator Abubakar Kyari, commended the Defence Headquarters in its role in fighting terrorism despite the funding challenges.
He said, “You are all aware that normal appropriation is not enough to sustain military operations especially the type that we have found ourselves in today.

“There is no doubt that the Defence Headquarters plays a crucial role in the coordination of the Armed Forces which has successfully sustained troops in the various operations across the country.

The appeal by the CDS comes during a period of intense engagement of the Armed Forces in the Lake Chad Basin just as other operations occupying various services continue in other parts of the country.