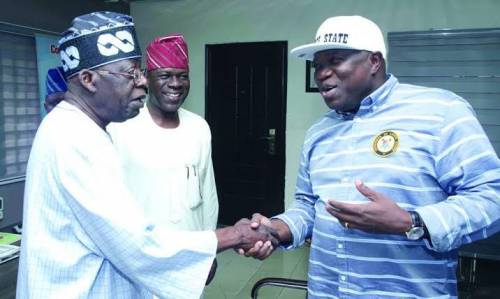 Asiwaju Bola Ahmed Tinubu, the National leaders of the All Progressive Congress, has applauded the courage of Governor Akinwunmi Ambode and others for accepting the outcome of the primaries of the party.

Tinubu described their action as evident of the spirit of sportsmanship.

The former Lagos Governor spoke at a stakeholders’ meeting held at the State secretariat of the party on Acme Road in Ogba on Monday where Governor Ambode officially endorsed the governorship candidate of the party, Babajide Sanwo-Olu and his deputy Obafemi Hamzat.

According to Tinubu, Ambode, his deputy, Dr. Idiat Adebule, and all the leaders and members of the party had done commendably well in respecting the supremacy of the party.

Addressing the gathering of the key party leaders in the State, Tinubu said, “I want to say thank you to all of you and God bless you.

“I thank all of you for respecting the party, particularly the present Governor, Akinwunmi Ambode and his deputy, Idiat Adebule. May God continue to bless you and guide you and you will live long with everlasting progress.

“Thank you to all our leaders, the Government Advisory Council (GAC) of Lagos State and the membership of the party who had embarked on reconciliation efforts to appeal to all our members who are initially aggrieved.”

“I want to thank you for maintaining peace, harmony, unity and love.”