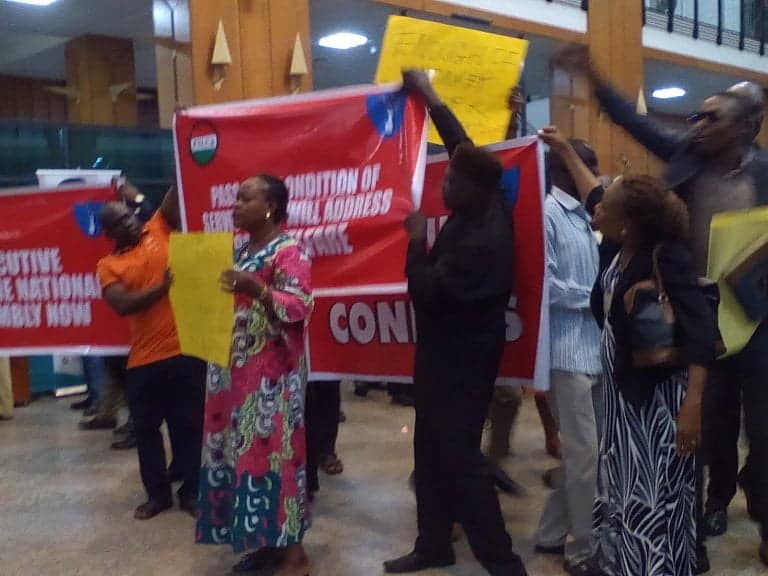 Staffs of the National Assembly have declared their intention to embark on their planned strike scheduled to begin on Monday.

The workers under the auspices of of the Parliamentary Staff Association of Nigeria has earlier on December 4, 2018 protested non-paid allowance by the National assembly.

Naija News understands that President Muhammadu Buhari wrote to the National Assembly last week to notify the legislature of his intention to lay the 2019 Appropriation Bill on Wednesday.

The Budget was expected to be presented on Wednesday before the National Assembly has planned to go on Christmas and New Year break on Thursday.

The presentation of the Budget is however threatened as PASAN has warned that non of it member will be present at their duty post.

President of the Senate, Bukola Saraki, and Speaker of the House of Representatives, Yakubu Dogara, in their intervention, had issued a three-day ultimatum to the Clerk to the National Assembly, Mr Mohammed Sani-Omolori, to address the issues.

The House of Representatives on December 6, 2018, summoned the Minister of Finance, Aisha Mohammed, over the non-release of funds appropriated to the National Assembly, part of which would be used to finance the new Consolidated Salary Structure approved for its workers.

Mohammed was expected to explain the delay on the non-implementation of the 2018 Appropriation Act which captures the 28 per cent increment of salaries under the new structure.

The Chairman of PASAN, Mr Musa Bature, had said, “We hereby reiterate that the proposed indefinite industrial action that will ground all legislative activities of the National Assembly (will hold),” adding that the workers would down tool from December 17.

The minister on Friday appeared before the Committee on Finance where she said no specific date could be stated for the release of the legislature’s allocation.

Speaking with our correspondent on Friday after the meeting between the minister and the lawmakers, Bature said issues raised by the workers had been partially addressed.

Asked to confirm when the strike would begin, Bature said, “It is Monday; we are starting on Monday. Four days warning strike.”

When asked if he was aware that the President would be at the National Assembly on Wednesday to lay the budget, the PASAN boss replied, “We are not stopping him from coming. But the staff of the National Assembly will not be available. We are not going to work. The legislators can go to work but there will be no staff to work for them.”

Bature said, “The condition of service (bill) has been attended to (passed) but the Senate and House have different versions but at least they have passed it and they will meet at the conference to harmonise it. The nomination of the NASC board, they have done their part and transmitted (it) to the President for assent. Those are the two issues that have been attended to.”