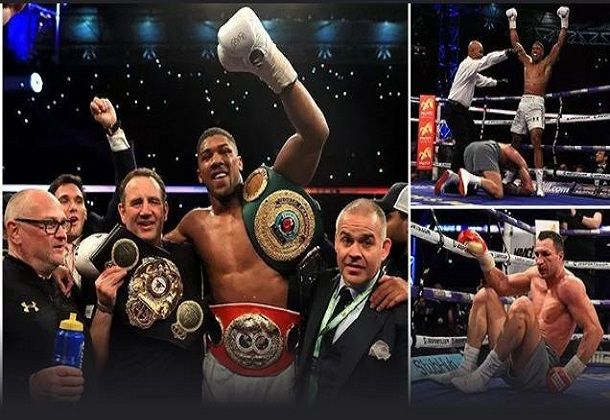 Wladimir Klitschko, former world boxing champion is in talks with with Anthony Joshua over a potential rematch and sensational comeback.

The former heavyweight world champion hung up his gloves after being stopped by Joshua in a epic clash at Wembley last year, but now seems tempted by the possibility of getting a second bite at the cherry amid uncertainty over the Brit’s next opponent.

Joshua’s promoter Eddie Hearn is narrowing down the list of options as they look for a credible name to put in front of the unified champion at Wembley on April 13 and claimed that Klitschko is keen to throw his name into the hat.

Hearn told iFL TV, “He wants to come back. I think he text AJ and said, “I wanna come back, I feel like I beat everybody in the division right now.”

However, as things stand, the winner of Dillian Whyte and Dereck Chisora’s grudge rematch later this month appear the obvious choice for the April 13 slot against Joshua, although Hearn remains optimistic of convincing Wilder to cross the pond in a battle for the undisputed championship.

The American and Fury have both expressed a desire to set up their rematch in the new year after their intriguing heavyweight contest ended in a draw.

Despite this, Hearn is still targeting Wilder as Joshua’s next opponent but is not yet willing to rule out a number of other options.

He added, “Joshua has always wanted to fight Deontay Wilder and he wants to fight him now. He wants to become the undisputed heavyweight champion of the world. The only way either fighter can do that is to fight each other.

“Currently it’s Deontay Wilder, that’s what we want. It might be Tyson Fury. It might be the winner of Whyte vs Chisora, it might be Oleksandr Usyk, and it might be Jarrell Miller. Everything’s in play.”