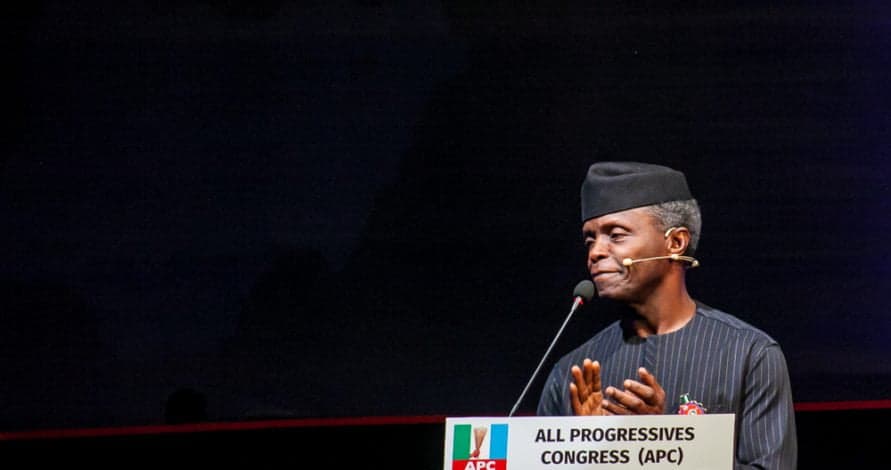 Vice President Yemi Osinbajo has blamed the nation’s slow economic growth on the level of corruption which he says was witnessed under the 16-year rule of the Peoples Democratic Party (PDP),Naija News Understands.

Which is more sensible to do?

Stay in your shop, protect it from present and future thieves or chase off the present thieves from your shop not minding what the future thieves might come to steal?#VPDebates @Gidi_Traffic

According to him, no nation can thrive with what he described as the “grand corruption” that the nation witnessed at the time.

As a result, he says Nigeria has suffered major infrastructure deficit, especially when compared to the economies such as South Africa and China.

“I think the common denominator between the two countries you mentioned is the strong infrastructure. Our country over the past 16 years, has suffered a major infrastructure deficit so we don’t have rail, we don’t roads and power,” Osinbajo said during the NEDG/BON Vice-Presidential Debate on Friday.

“When we came into office in 2015, power was at 4,000 megawatts that’s in 16 years, so we need strong infrastructure and nobody came make excuses about that… which is one of the major focus of our administration’s policy. “The second thing is that you cannot have a thriving economy if you allow the type of grand corruption that has taken place in Nigeria in the past 16 years.
“I’ve heard one of the candidates say that fighting corruption is not an economic policy.

Meanwhile, the former president of Nigeria, Chief Olusegun Obasanjo   in his reaction to the vice presidential debate stated that

After watching the #VPDebates, I am convinced that the choice of Peter Obi was well thought-out. With the way he reduced a Senior Advocate of Nigeria to ordinary "charge & bail" lawyer, I have no doubt that he'll help Atiku to reduce unemployment to the barest minimum #2019Debate

Speaking further, the VP praised the Muhammadu Buhari administration for what he described as its efforts in reviving the economy in the last three years.

According to him, the administration has spent N2.7 trillion on capital – “the highest ever in the history of Nigeria, despite earning 60 % less than the previous government”.

“We have currently spent 2.7 trillion in two budget cycles and we’re earning 60 per cent less.

Peter Obi: you can’t leave your shop and be chasing criminals.

Meanwhile, the candidate of the PDP, Peter Obi, took a swipe at the Buhari administration, saying that it prioritized the fight against corruption over improving the growth of the economy.

He said, “You can’t close down your shop and be chasing criminals”.

In response, however, Osinbajo said, “If you allow the criminals to steal all the inventory in the shop, there will be no shop”.