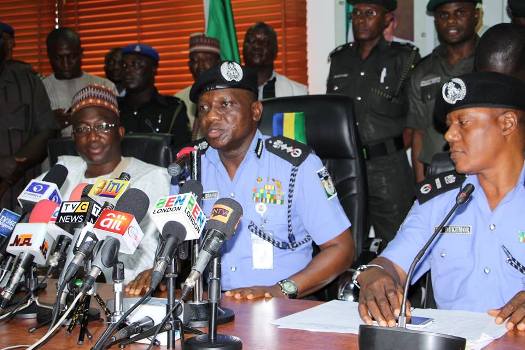 The Force Public Relations Officer, Ag. DCP Jimoh Moshood, told newsmen in Lagos that the suspects operated the factory from a four-bedroom building located at No. 2 Okunnenye Street, Ikotun Egbe area of the state.

Parading the suspects at the factory premises, Moshood said the IRT operatives raided the secret factory on Thursday, following a tip off.

According to him, large quantities of suspected fake drugs were seized during the raid.

“Recovered from the scene were cartons of different fake drugs, large quantities of unprocessed chemical substances used in manufacturing drugs, several machines fabricated for processing, manufacturing and packaging of the fake drugs.

“Also recovered are forged pharmaceutical papers, plastic buckets of different types suspected to be fake.
The premises has also been sealed and remains sealed till the determination of the matter by a court.

“The I-GP has advised members of the public to be weary of where they procure food, drugs and drinks as many of them are fake and may cause outright death or physical and mental disability,” Moshood said.

The principal suspect later told journalists that he owned the factory, stressing that he learnt the trade from a friend who died four years ago.

“Although I am not a pharmacist or a chemist, but the medications are not totally fake as I use quality chemicals to produce them.

” My market is at Onitsha Anambra State, I don’t supply in Lagos. I distribute only in Onitsha and they in turn know where they distribute to. I have not really made too much money but at least, I have made little money.

“I am the owner of the place. I do take the drug and give to my wife and children because it is not totally fake to treat malaria. I try to be genuine.

“Instead of 250mg, I make it 180mg. That is the only offence I have committed but really the medicine works,” the suspect said.

A correspondent of the News Agency of Nigeria at the scene reports that the uncompleted building served as factory and residence for the suspects.