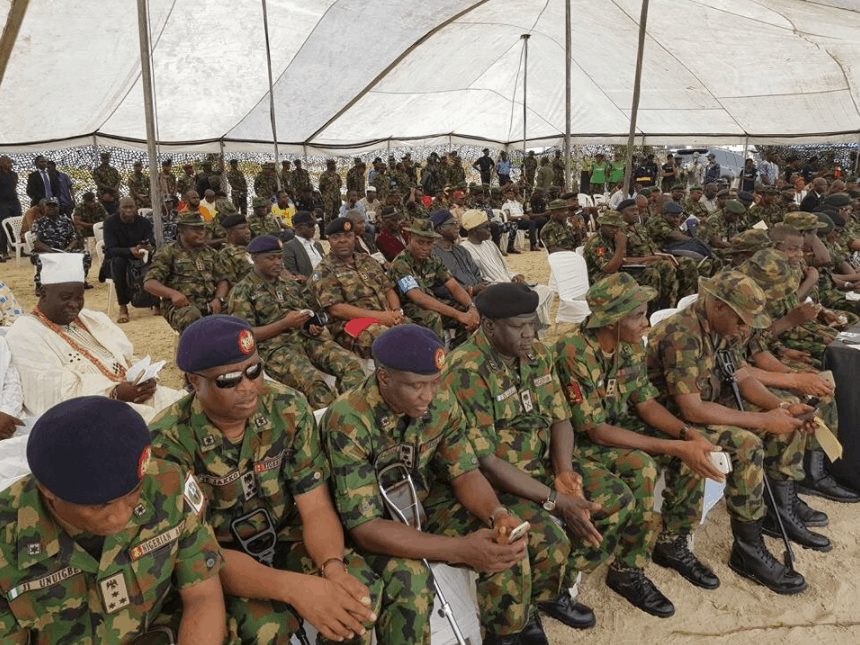 19 Soldiers Of Those Killed In Metele Attack

The Nigerian Army has buried 19 soldiers among those were killed in an attack by Boko Haram terrorists at Metele, Guzamala Local Government Area, Borno state.

While reports says about 44 soldiers  were killed  in the attack, the Army said 23 soldiers were killed while 31 others wounded from the attack on 157 Task Force Battalion, Metele, on Nov. 18, Naija News reports.

The fallen heroes, who were laid to rest at the Military Cemetery, Maimalari Cantonment, Maiduguri, include, Lt. Col. IA Sakaba and 18 soldiers.

The Chief of Army Staff, Lt. Gen. Tukur Buratai, described the incident as tragic, noting that the soldiers sacrificed their lives in defence of the nation’s territorial integrity.

Represented by Maj.-Gen. Lamidi Adeosun, Chief, Army Training and Operations, Buratai announced that the deceased soldiers would be buried when their relatives arrived in Maiduguri.

He said that the army lost some troops and equipment due to upsurge of insurgents’ activities in recent months.

He, however, said that the setback would not deter the troops from their commitment to defeat the insurgents.

Buratai reiterated the determination of the Nigerian Army to end insurgency; protect lives and property as well as restore peace to the North-East.

He said that military authorities would take care of the families of the deceased in line with its welfare scheme, and prayed for the repose of their souls.

“President Muhammad Buhari administration’s is committed to the improvement of soldiers’ welfare and provision of equipment to ensure successful campaign against the Boko Haram insurgents.

“The military will collaborate with sister security organizations in the counter-insurgency operation,” he said, and called on the troops to be disciplined and not relent in routing remnants of the insurgents.

According to him, the military authorities will deploy additional personnel and equipment to the theatre of operation, to facilitate successful implementation of the counter insurgency campaign.

Buratai also called on the people to shun fake news and support the military to enable it win the war against the Boko Haram terrorists.

In his remark, Deputy Governor of Borno, Alhaji Mamman Durkwa, said the state government appreciated the sacrifices of the military to the restoration of peace in the state.

Durkwa assured that the government would support the families of the fallen heroes to improve their wellbeing.

He called on military authorities to support the bereaved families and prayed for the repose of the souls of the fallen heroes.

The ceremony was attended by senior military officers, government officials, representatives of the Shehu of Borno and family members of the deceased.