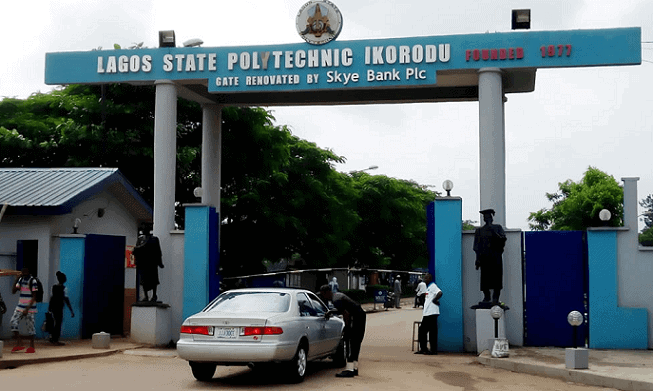 Activities are still in its full gear at the Lagos State Polytechnic (LASPOTECH), Ikorodu, in spite of the ongoing nationwide strike declared by the Academic Staff Union of Polytechnic (ASUP) on Wednesday.

ASUP had declared a comprehensive and indefinite strike from Dec. 12 in all the nation’s polytechnics to compel the government to meet their demands.

As reported by Naija News, Mr Usman Dutse, the National President of the union, had said that the strike became necessary following the failure of the Federal Government to implement the 2009 and 2017 agreements reached with the union.

Mr Salami Olugbenga, the embattled Vice-Chairman, ASUP, LASPOTHECH chapter, told NAN in Lagos that they could not join the strike because there was no organ of the union on ground in the polytechnic since December 2017.

Olugbenga said this was as a result of an internal crisis between the union and the polytechnic’s management which had yet to be resolved by the court.

“We are not on strike because we have some internal wranglings with the management sometime last year which is still in court.

“We can’t join the strike because there is no organ of the union on ground for now,” he said.

The vice-chairman said the management had also stopped the check-off dues of the union members since Dec. 2017 and that there was nothing the members could do about it even though they were unsatisfied.

“Our members at some point were looking up to ASUP National to wade into the matter and resolve it, unfortunately, the national body is seriously disappointing.

“The national came to LASPOTECH at some point and met the Rector, maybe because the rector was so adamant and the case was already in court, they felt there was nothing they could do about it,he said.

Olugbenga said the polytechnic had attempted to withdraw the case but the union executives knowing that this would enable the management to clamp down heavily on some of them, refused and filed a counter claim.

He said the management had also demanded that the court grant them right to demigrate the union members from CONTISS 15 Salary Structure as agreed between ASUP and Federal Government in 2009.

According to him, the management claimed that the ASUP, LASPOTHECH chapter, forced it into signing the agreement and that was why they could not pay the arrears.

The unionist said the counter claim filed by the union’s embattled executives enabled the court to order that all issues between the union and the management return to status quo and be implemented as such until the court judgement.

“Since then, all issues remained as before to avoid contempt of the court, our salary is paid in line with CONTISS 15 but the arrears since 2009 remain on paid.

“The union had appeared again in court on Dec. 6, but unfortunately the court could not sit,” he said.

Reacting, The Polytechnic Spokesman, Mr Olarewaju Kuye, also confirmed to NAN that the institution was not on strike.

Kuye said that the issues between the union and the polytechnic management were still in court and so they await the court decision.

He, however, dismissed the claim that the union check-off due was indiscriminately stopped.

Kuye explained that the management had called on the unions to renew the mandate of their members last year to enable it to continue to deduct the dues of their members.