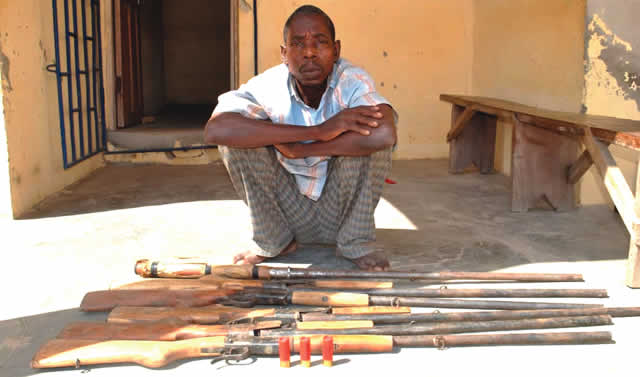 A man identified as Musa Mora, from Babana in Borgu Local Government Area of Niger State, has been arrested by the Police Command in the state for unlawful possession of firearms.

The suspect and his accomplice, Babangida Rabiu, an indigent of Dangulu area of Zamfara State, who is still at large, had on two occasions traveled to Benin Republic to illegally purchase firearms.

Mora while speaking with Punch claimed that he purchased the guns from Benin Republic and sold them to those who needed them for self protection.

“I buy and sell locally-made guns and I sell them to people who are in need of guns to protect themselves, but if they do any other thing with it, that is none of my business,” Mora said.

Mora revealed that he had been involved in the business for six years before his accomplice joined him, he further stated that they were making money from gunrunning.

Asked whether he regretted his action, the suspect said, “I do not regret anything; it is my source of livelihood; I used the money to take care of myself. I don’t kill people with the guns.”

The command’s Public Relations Officer, Muhammad Abubakar, said the suspect had confessed to the crime.

“The police will no longer tolerate unlawful possession of firearms in the state and we have warned people to desist from it or face the consequences of the law,” Abubakar stated.

He said the suspect had been arraigned before a court.