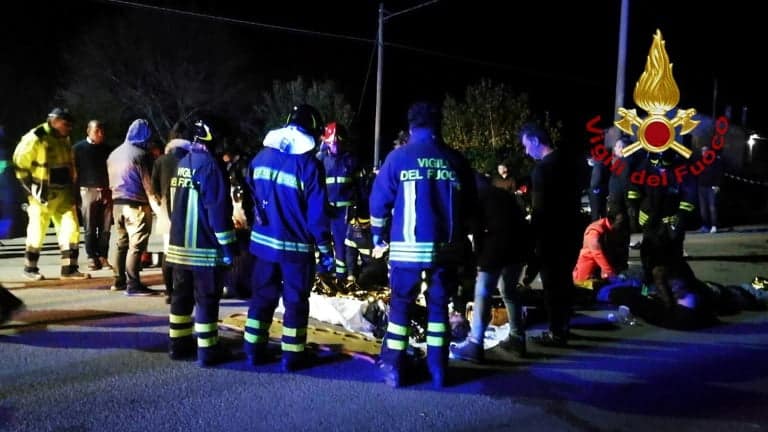 Image provided by the rescue services of injured persons treated outside the discotheque in Ancona, December 8, 2018

Six people were killed and dozens more were wounded in the night from Friday to Saturday in a panic among hundreds of young people gathered for a rap concert in a disco in Corinaldo, near Ancona in Italy.

“Perhaps because of the dispersion of an irritating substance, the young people have fled by walking on each other, unfortunately, six have died and dozens wounded,” Italian firefighters announced on Twitter. .

According to media reports, the six dead are five minors – three girls and two boys – and one adult, a woman who had come with her daughter to the concert. In the morning, the vital prognosis was still engaged for seven wounded.

“You can not die like that at the age of 15,” said Interior Minister Matteo Salvini, pledging to “find those responsible for these six broken lives, those who have become malice, stupidity or greed transformed. a party of tragedy”.

He also announced a minute of silence during his late League’s (extreme right) party in the late morning in Rome, hoping to get there in the day.

There were about a thousand people – probably more than the authorized capacity of the hall according to the media -, many of them teenagers, in the disco Lanterna Azzurra (Blue Lantern), in a rural area near the Adriatic coast, in the center of Italy.

All had come to hear a concert by Sfera Ebbasta, a popular rapper among the young, dubbed the “king of the trap“, a form of slow-paced rap.

“I am deeply saddened by what happened,” reacted the rapper on Instagram. “I would just like to ask everyone to think about how dangerous and stupid it can be to use irritating spray in a disco,” he said, announcing that he had canceled his next promotional commitments.

Pope Francis said he would pray for “the children and the mother who died last night (…) as well as for the wounded”.

“We were dancing until the concert started when we felt a pungent odor,” a 16-year-old wounded man told the media, told a hospital in Ancona. “We ran to one of the emergency exits but we found it blocked, the bouncers told us to come back.”

According to the first elements of the investigation quoted by the media, there were three emergency exits, one of which overlooked a small bridge leading to the car park. Under pressure from the crowd, a balustrade broke and dozens of people fell into a small ditch one meter below. Those who found themselves below died crushed.

In the night, the surroundings of the discotheque were the scene of a comings and goings of ambulances and rescuers among the cries and tears of the relatives of the victims while a pile of abandoned shoes testified moments of panic, reported the local online newspaper Ancona Today.

“It’s not possible, you can not die like that, wake up Mattia, I beg you,” a woman was kneeling in front of her son’s body, according to Ancona Today.

In Italy, this movement of panic because of an irritating spray is reminiscent of the huge scramble that had left one dead and 1,500 wounded in June 2017 during the broadcast of the final of the Football Champions League in San Carlo square in Turin.

A few minutes before the end of the final that had seen Juventus Turin bow to Real Madrid, the panic suddenly spread, amidst bomb rumors, among the 20,000 or so people who came to watch the game broadcast on screen. giant.

After almost a year of investigation, eight people were arrested in April on suspicion of causing the scramble by spreading an irritating spray on the crowd. The group would have used this process to steal valuables from viewers.