It’s a familiar scene in the cemeteries of South Africa. The population does not stop growing and there is not enough space. Then the gravediggers have no choice but to bury the dead in the existing graves.

In the cemeteries of the largest city of the country Johannesburg, 45 to 60 burials are reopened each week. Local authorities are worried about this, to the point of considering making incineration mandatory.

“Our cemeteries are suffocating, as a result of the very strong population movements, both internal and external, that affect Johannesburg”, notes, fatalistic, Reggie Moloi, municipal manager of the sector.

The situation of the other big cities is hardly more enviable. On the shores of the Indian Ocean, Durban (north-east) sounded the alarm of funeral overpopulation about ten years ago.

In the early 1990s, the political violence that accompanied the transition from apartheid to democracy and the ravages of the AIDS epidemic dramatically increased mortality in the capital city of KwaZulu Natal Province.

“We then found that the cemeteries were filling up very quickly and that (…) we would quickly run out of space,” recalls Thembinkosi Ngcobo, head of parks for eThekwini Municipality, which includes Durban.

Fears have since been confirmed. And the families of the agglomeration are threatened to be closed the door of the municipal cemeteries to the nose.

“We are facing a serious problem,” sums up, worried, Thembinkosi Ngcobo.

“The situation is serious and difficult to understand by the average citizen and the decision makers who, in view of the large unoccupied spaces of our country, assume that we still have a lot of room”, abounds Denis Ing, Vice President of the South African Association of Cemeteries.

The crisis has forced local authorities to urgently think of innovative alternatives. 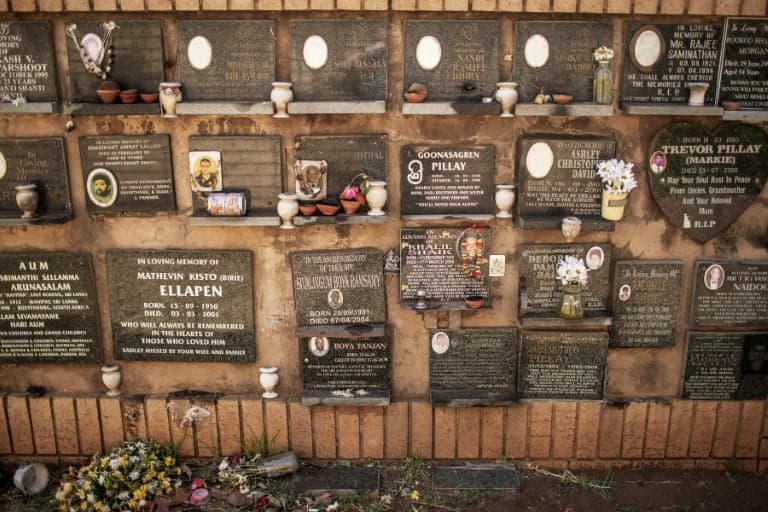 The recycling of ancient tombs is one, cremation another. But this last solution comes up against the reluctance of a population still very attached to its traditions.

In the Roodeport district of Johannesburg, the Sipamla family has chosen to bury 87-year-old grandmother Caroline in the same grave as her son.

“The cemeteries are completely full,” she says, the daughter of the deceased, Puleng Sipamla. “It seemed easier and cheaper to reopen the grave (of his brother) than to dig another one.”

Caroline had explicitly refused to be cremated. “She was very clear,” recalls her granddaughter Zoleka Sipamla, “she also said you can bury me on my son”.

The Reverend Harold Ginya of the Church of Nazareth recommends the same solution to his flock.

“This is clearly what you prefer, no one will ever complain, saying, you are above me,” the cleric pointed out bluntly. “And above all, we do not believe in cremation“.

Many South Africans share his opinion. Especially among the most “old”, who still associate the image of fire with that of hell.

The Hindu Chapel of the Crematorium at Avalon Cemetery, Soweto, November 15, 2018.

Others refuse cremation because they are convinced that only a complete body can reach beyond.

“Cremation is culturally unimaginable to them because they believe in the importance of the human body, to its power,” notes anthropologist Casey Golomski of the University of New Hampshire (USA).

“They therefore want to avoid cremation at all costs”, adds this specialist of customs in eSwatini (ex-Swaziland).

In fact, very few blacks are cremated in Durban. Only one on average every week, compared to several dozens of traditional burials, according to the authorities.

To overcome the reluctance it arouses, “it might be useful to explain to people why they should choose cremation,” suggests the young Zoleka Sipamla. “We can just tell them that space is not infinite.”

Whether one is for or against, cremation may soon impose itself to all.

A gravedigger digs a grave at Soweto’s Avalon Cemetery, November 15, 2018 in Johannesburg.

At a time when the South African government wants to revive the redistribution of land for the benefit of the black majority despoiled under apartheid, land pressure is such that cemeteries will surely not be served first.

Some municipalities are therefore publicly agitating the idea of ​​making incineration mandatory.

“There is a time when the people of Johannesburg will have no choice but the crematorium or the reuse of existing graves,” Reggie Moloi warns, “real estate pressure is such that we can no longer allocate land to cemeteries” .