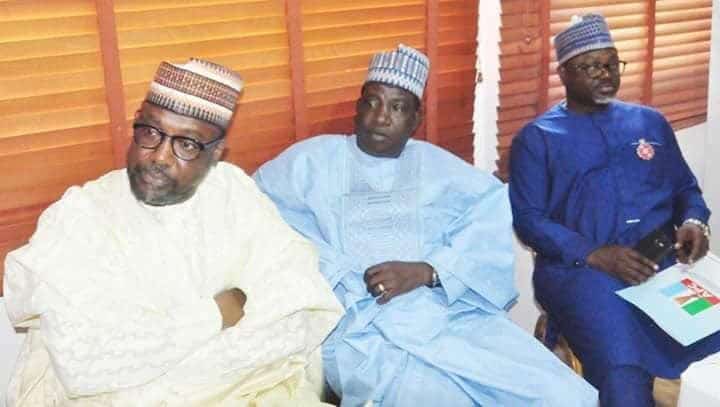 APC Attempts To Close Rank Ahead Of 2019 Elections

Majority of governors in Nigeria’s ruling party, APC, were yesterday reportedly absent at a meeting called by the national chairman of the party, Adams Oshiomhole, and the party’s National Executive Committee.

Governor Abubakar Sani Bello yesterday attended the All Progressive Congress (APC) Meeting with other party stalwarts at the party secretariat in Abuja. pic.twitter.com/8YMwzGXQGf

The party kept mum on why its invited governors were absent at the meeting.

Its spokesperson, Lanre Isa-Onilu, did not respond to calls and messages sent to him on the matter. The meeting commenced at about 12:10 p.m. and lasted for about two hours.

Journalists were only allowed to observe the commencement of the meeting.

At the meeting, the APC urged its candidates to run inclusive and issue-based campaigns. It also warned its leaders in the states against supporting candidates of other parties.

Thursday’s consultative meeting of the APC NWC, which held at the party’s National Secretariat in Abuja was presided over by its National Chairman, Adams Oshiomhole.

“I call on governorship candidates to run an issue-based campaign based on the unprecedented achievements of the President Muhammadu Buhari-led APC administration which is evident in all the states of the federation,” Mr Oshiomhole said in his opening address.

“The party’s governorship candidates should run an inclusive campaign by bringing onboard former aspirants and domesticate ongoing peace and reconciliation efforts undertaken by the National Working Committee (NWC).”

Mr Oshiomhole also said the meeting would enable the candidates seek clarifications from the national leadership of the party on any matter they thought was important.

“We are obligated as a party to market between now and 20th of March, 2019 not only our party members but to all Nigerians who are of voting age,” the chairman said.

“I thought it is also helpful that the candidates themselves know one another.”

Speaking on the outbursts that followed the primaries, he said “In many states, we have many challenges” but said state organs of the party recognized that they had to be neutral.

“I guess in some states, some of the executives were able to maintain that level of neutrality and in some other states, the story was different as we read in the newspapers of some state organs interfering with the process. So, we imagined that there could have been some cries and some quarrels.”

He said the candidates have a more important role to play as their actions will help the reconciliation process. Mr Oshiomhole said the state chairmen should work with the candidates, not only for governorship but for all the elections whether they like them or not, nothing the window for substitution has closed.

“We will play our parts and we should have far more governors after next year’s election than we have at the moment.”

According to a statement released shortly after the meeting by Mr Issa-Onilu, the party said the meeting observed a minute silence in honour of the late chairman of the Cross River State chapter of the Party, Mathew Achebe, who died recently in a ghastly auto crash.

The statement also said the meeting frowned at attempts by some party leaders to polarise the party in some states following post-primary disputes and resolved that party leaders must campaign for all candidates of the party.

It described a situation where leaders engage in selective support by picking and choosing candidates to campaign for and support as anti-party.