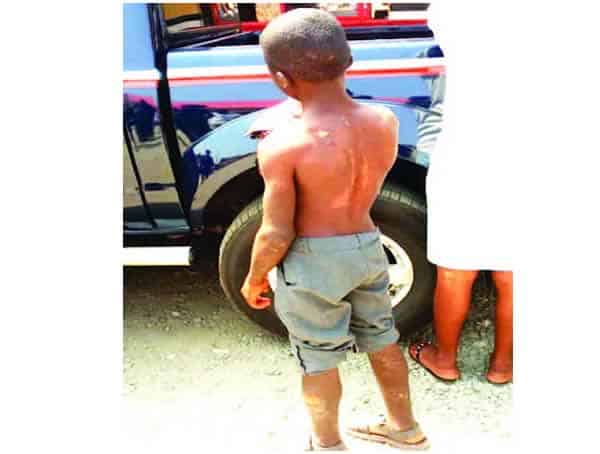 A middle aged woman identified as Abimbola Oreoluwa, has been arrested by Ondo State Command of the Nigeria Security and Civil Defence Corps for allegedly torturing her houseboy.

The accused was alleged to have poured hot water on the 12 year old boy and cut him with a razor blade for allegedly stealing some household items.

The Commandant of NSCDC in the state, Pedro Awili, while parading the suspect at the command’s headquarters, Alagbaka, Akure, on Tuesday, said Abimbola was fond of maltreating the boy.

The NSCDC boss stated, “Abimbola inflicted series of injuries on the boy with a razor blade and poured hot water on him; she accused the boy of stealing her things.

“Our investigation revealed that the boy is from Benin Republic and the woman got him through his master in Abeokuta, Ogun State.

“She brought him to her house as a houseboy and paid N120,000 to his master. We are going to arrest the man in Abeokuta, because this is a case of a child abuse and human trafficking.

“The woman has been maltreating the boy. She didn’t allow him to go to school; she seriously abused the boy by beating him up for any little mistake he made.”

The suspect, Abimbola, admitted that she poured hot water on the boy, but added that it was not intentional.

She said, “He has been living with me for almost a year now and is found of destroying my properties my car, clothes and many other things and he also steals.

“I got him from one woman in Abeokuta and l didn’t know he is from Cotonou. I told the woman that l needed someone to assist me and not a child like this.

“When the boy came, l told the woman that he was too small for me to accept; she said that l should just manage him that she would bring another person in two months. Since that time, l have been calling her, but she hasn’t showed up.

“But what really happened was in self defence, it wasn’t intentional. He was trying to block me with an iron chair when the kettle l was holding which had hot water in it fell on him when he was trying to run away.”