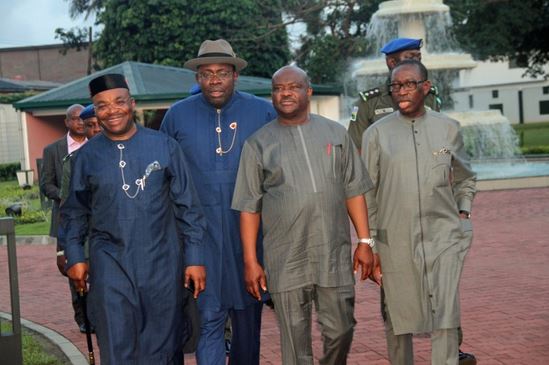 PDP Explains Absence Of Some Governors At Sokoto Rally

The Peoples Democratic Party (PDP), has dismissed media reports that governors elected on the platform of the party from the South East geo-political zone shunned the party’s Zonal rally held in Sokoto on Monday.

I am the one to lead PDP campaign South South, my purported resignation rumor from PDP campaign team was orchestrated by those that are panicking already”.
~ Gov. Nyesome Wike of Rivers State.#LetsGetNigeriaWorkingAgain#AtikuObi2019 pic.twitter.com/ogoc5F7tuL

The PDP Presidential Campaign Organisation gave the dismissal in a statement issued by its Director, Media and Publicity, Mr Kola Ologbondiyan on Tuesday in Abuja.

The party has three out of the five governors in the region: Dave Umahi(Ebonyi), Ifeanyi Ugwuanyi(Enugu) and Okezie Ikpeazu(Abia).

Ologbondiyan said that the report that the governors from the South East were absent because they have no support for the aspiration of its Presidential candidate, Atiku Abubakar, was only a figment of the imagination of those peddling the rumour.

He said that such insinuation smacked of ignorance and mischief on the part of those peddling it.

Ologbondiyan said that the Sokoto Presidential Zonal rally was for the North West geo-political zone and would be replicated in the remaining five geopolitical zones of the country.

“There is no sense in the insinuation since, going by the campaign time-table, the Presidential Candidate will visit all the zones, where all the governors elected on the platform of the party from those zones will be present.

“Abubakar’s next port of call will be Ilorin, the Kwara State capital on Wednesday where the party will hold the North Central Presidential Zonal rally which will have in attendance state governors leaders, members and supporters of the party in the zone.

“This is the same arrangement that we have for all the geo-political zones of the country.

“The so-called shunning of the Sokoto rally by PDP governors of South East extraction was only a figment of the imagination of those peddling the wicked rumour.”

Ologbondiyan said he wondered why some people had decided to peddle falsehood about the PDP and its flagbearer, just to score cheap political points.

He said such negative reports about the PDP and Atiku were being sponsored by those who have become jittery at the rising profile of its presidential candidate.

“But we are undaunted because Nigerians are very discerning. In the fullness of time, the lies and those behind them will be exposed,” he said.

As earlier reported by Naija News, the PDP began its 2019 presidential campaign with a rally for North West in Sokoto state on Monday.