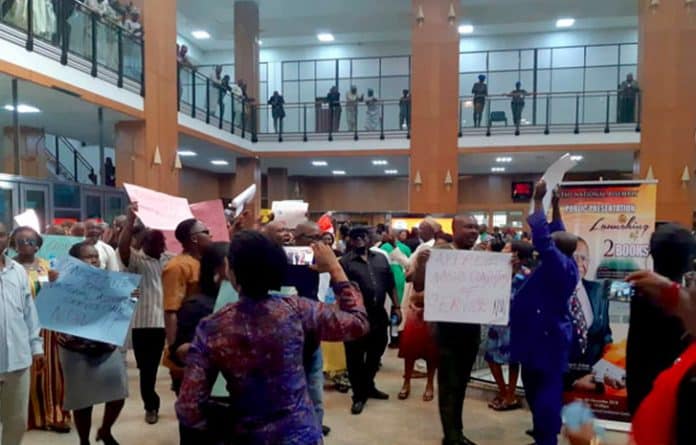 Despite pleas by the management, the staff of National Assembly under the aegis of Parliamentary Staff Association of Nigeria (PASAN),today, picketed the Assembly and prevented lawmakers from gaining access to the chambers.

Naija News recalls that the Deputy President of the Senate, Ike Ekweremadu, who entered the National Assembly lobby about 10:22am was also prevented from entry into the chamber by the staff, while other lawmakers from both chambers, who came earlier before Ekweremadu suffered the same fate, they were not allowed into the chambers.

Not only were the lawmakers prevented from gaining access to the chamber, but the entrance of both chambers were blocked by the staff especially women, Naija News reports.

The staff, who carried placards with inscriptions, “NASS is not Omolori’s farm; Omolori is now a contractor; Omolori pack and go; probe NASS management now; bank loans are killing us; pass our condition of service, SP, Speaker; enough of monkey dey work, baboon dey chop; release our promotion letters;” and other inscriptions, started shouting when they saw Ekweremadu and other lawmakers that there will not be plenary session.

After much efforts, the security personnel attached to Ekweremadu had no other option than to lead their principal through another route to his office.

The Independent reports that a staff said the management had not paid salaries, adding that in the days of the previous Clerk, Salisu Mekasua things were a bit better.

The staff further said that at the moment, the management is owing them salaries and allowances running into billions.

It was gathered that the tenure of the Clerk, Sani Omolori, has expired and was supposed to proceed on terminal leave from November last month.

It was further gathered that the Clerk has been lobbying those concerned, especially the principal officers, to extend his tenure.

The staff, also said that from the way things are going, the Clerk may get another two years, unless the staff stood their ground that he must go.

Recall that the staff had at the weekend warned that they will picket the assembly from Tuesday to Thursday and would eventually embark on indefinite strike on the 14th of this month if their demands are not met.

The demands of the staff among other things have been that the management should address “all pending staff promotions and conversion letters be released with areas due fully paid, while the 2018 promotion eligibility list be released and promotion exams conducted on or before 31 December.”

The staff also demanded that retired officers still at duty post should quit immediately and also that the management should stop using consultants for jobs the staff can do.

The staff had also pointed out that while the demand for capacity building exercises duly meant for them are not implemented, management is spending about N40 million for itself on tour.

The staff further noted that those, who passed the 2018 promotion examinations have not started receiving reviewed salaries, also that allowances have not been paid and their entitlements have been denied and have also called for review of condition of services.

Responding to their demands, the Clerk of the National Assembly, Omolori, had on Monday wrote a letter to PASAN, warning that they should not embark on their plan of picketing or going on strike.

The Clerk, in a letter to PASAN made available to our correspondent, had said, “It is clear to me that you have consistently breached the channel of communication in the previous and instant cases.

“May I remind you that you are first and foremost civil servants before being Trade Union officials?

“It is therefore important that under each and every circumstance you must follow the established channels of communication.

“My advice is that, henceforth, all communication to the presiding officers should be routed through my office, via the secretary, Human Resources and Staff Development.

“Let me therefore state that your determination to embark on an industrial action by means, without exhausting the options available to you is uncalled for as picketing and strike action should be the last resort instead of the first industrial relation.”

Omolori, who urged the staff to shelve their plan of picketing and embarking on indefinite strike, had however, pointed out that their grievances are being addressed by the management of the National Assembly headed by him.