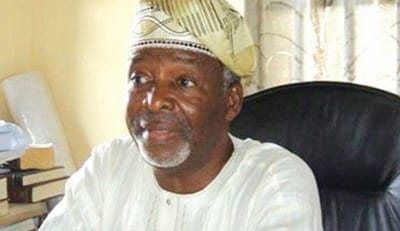 The Pan-Yoruba socio-cultural group, Afenifere, has described the late Founder of the Oodua People’s Congress (OPC), Dr Frederick Fasheun, as a great patriot and a selfless leader.

As earlier reported by Naija News, Fasheun died on Saturday at the intensive care unit of the Lagos State University Teaching Hospital Ikeja.

Prof. Banji Akintoye, Chairman, Political Committee, Afenifere Group,  who spoke in Lagos earlier today said the late OPC founder was a lover of the nation and had put his life on line to defend the interest of the Yoruba race.

He said Fasheun lived an exemplary life worthy of emulation, saying that his death came as a rude shock to the group.

“Fasheun was a friend, a great patriot, a lover of his nation, a straight forward man, a true and selfless leader of his people.”We thank God for all he had been able to do and memories he left behind.”We want his family to know that we will always honour his memory, as we will miss him greatly,’’ the Afenifere chieftain said.

The new president, Prince Oshibote Oodua, was announced at Century Hotel, Okota, Lagos, where members of the congress gat… pic.twitter.com/yGLoN2xE3v

He said the frailty of the country’s political leaders hinged on excessive push for personal wealth and unending opulent consumption pattern which continued to threaten the potential of the country becoming a truly wealthy nation.

“Leaders want to become rich by sharing in the stolen public money and they want to live a life bigger than life; this is bad.”Nigerian leaders must learn from late Fasheun, his selfless leadership style and contentment, ‘’Akintoye said.